The HTC Desire 500 release date in Taiwan has been set for the start of August and a price has also been disclosed. This addition from HTC falls in the entry-level category as the 200 model, but it features slightly better specifications than the latter and a higher price.

Designed for entertainment, the HTC Desire 500 runs on Android and while no specific version has been disclosed, we suspect that Jelly Bean 4.1 will be behind the wheel. There’s also the inclusion of Sense 5, the company’s latest UI which introduces various enhancements includinh BlinkFeed that keeps users updated with social network posts and news amongst others. With Automatic Video Highlights, 30-second clips are automatically created from images and videos in the gallery. 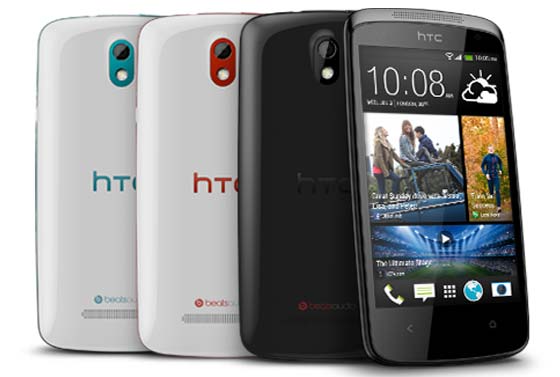 The device features an 8MP rear camera with a dedicated ImageChip and 720p video recording. Owing to this, users will be able to snap up images in multi-shot burst mode, while VideoPic enables simultaneous capture of videos and pictures. On the hardware front, the handset employs the same quad core 1.2GHz Snapdragon 200 processor as the 600 model and it even houses dual SIM card slots. However, it doesn’t carry Boom Sound speakers like the latter.

The inclusion of Beats Audio is inevitable and at 9.9mm thick, the handset flaunts a 4.3-inch WVGA screen on the front. This package also includes 1GB of RAM, 4GB of storage, a microSDXC card slot, Bluetooth 4.0, Wi-Fi, GPS and an 1800mAh battery.

GSMArena notes that the Desire 500 will be released on August 1 through Taiwan Mobile for a price of NT$11,900 that translates to just below $400 in the US, which is a bit too much for an entry-level phone.