The HTC Desire 500 is headed to the UK and it will hit carriers as well as retailers this month with optional dual SIM and NFC variants in tow. The smartphone was announced for Taiwan last month and has already gone on sale. It’s the third installment in the company’s 2013 Desire lineup with the first two being the 600 and 200 models.

The HTC Desire 500 is aimed towards the entry-level segment by carrying an affordable price tag. In spite of this, the device is loaded with rich features that made their debut on the HTC One smartphone. With Android Jelly Bean in the driver’s seat, the company has coated the OS with its own Sense UI and BlinkFeed, an inevitable feature which can be ignored, but not removed. The smartphone is said to arrive in lacquer black and glacier blue shades. It measures 9.9mm thick and weighs 123 grams. On the front, the HTC Desire 500 sports a 4.3-inch touchscreen with WVGA resolution. 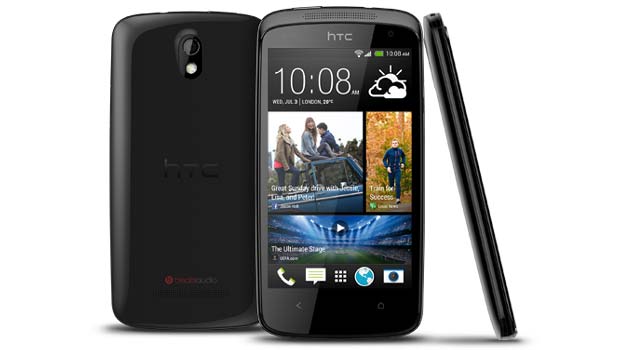 Accompanying the display is a 1.6MP camera, while the rear plays host to an 8MP snapper. On the inside, buyers will be treated to a quad core Qualcomm Snapdragon 200 processor clocked at 1.2GHz, 1GB of RAM, 4GB of flash storage with 64GB expandability and a 1800mAh battery which can provide up to 12.2 hours of talktime or 435 hours of standby on 3G. The Desire 500 also features Bluetooth 4.0, Wi-Fi 802.11 b/g/n and DLNA.

There’s no precise date on which the Desire 500 will go on sale in the UK and the rest of Europe, but potential buyers will be able to pick up the handset this month itself in dual SIM and NFC variants apart from the normal model. Price details are still to be announced.