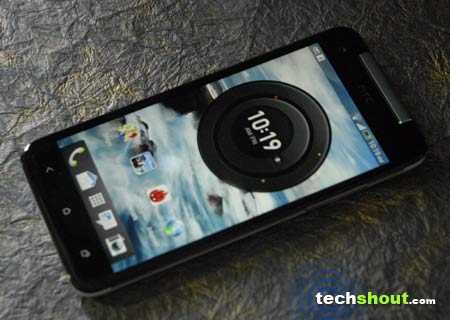 We’re reviewing the HTC Butterfly, the smartphone that has set a new standard for the Android ecosystem. Gone are the days of HD, as the latest high-end devices have started packing HDTV-equivalent screens into compact form factors. Sounds impressive – But these handsets obviously won’t come cheap and they’re mostly top of the line, taking the position of flagship under their respective branding. The device being spoken of is the global version of the Japan-specific version that has the letter ‘J’ in its moniker and the US has been treated to an LTE variant that goes by the name Droid DNA. Today, we’re going to verify if these highly alluring attributes are feasible and not just a gamble or gimmick to grab buyers’ attention – Expect a detailed analysis below. 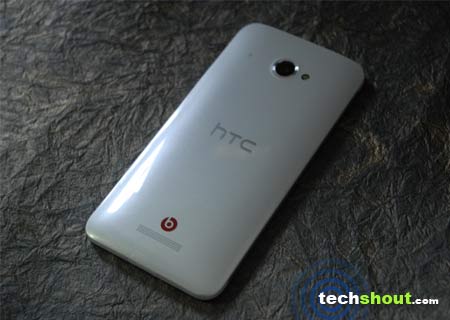 The handset was once speculated to come re-branded as a Nexus smartphone in similar fashion to the Optimus G and Nexus 4 from LG. Instead, we got 3 specific versions tailored to meet different criteria. Well, like most mobile phone variants, the majority of the specifications remain unmodified. So you basically get the goodness of the Android Jelly Bean 4.1 platform with a coating of the Sense UI. Visuals are delivered through a 5-inch 1080p super LCD 3 touchscreen that proffers a pixel density of 440ppi with a Corning Gorilla Glass 2 protective layer.

Tucked away on the inside is a Qualcomm Snapdragon S4 quad core processor operating at 1.5GHz and 2GB of RAM to assist in performance, along with 16GB of storage and a 2020mAh Li-polymer battery. You’ll be able to throw in 32GB more through the microSD card slot. To keep you connected, the company has included all sorts of options such as aGPS with GLONASS, aptX enabled Bluetooth 4.0, Wi-Fi IEEE 802.11 a/b/g/n, DLNA, USB 2.0 with MHL support and HSPA. Sadly though, it has dropped off NFC from this particular variant’s blueprints. 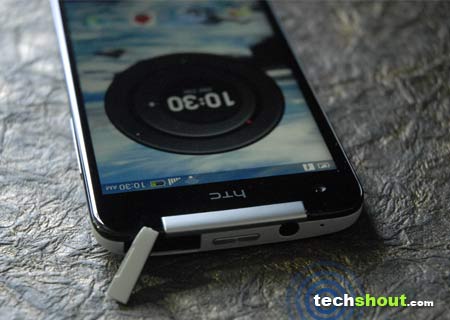 Apple’s ideology of a 4-inch phone, the iPhone 5, being perfect for one hand-use is quite accurate, but that doesn’t mean pushing the boundaries a bit will have manufacturers falling over the edge. Well, some seemingly have, while others have found just the right spot. The 5-inch segment not only delivers a rich entertainment experience owing to the wide screen size, but it also houses devices that are highly portable and convenient to use. The Butterfly is one such smartphone that can be operated with just one hand, sans much effort. The phone is really light, carrying a weight of 140 grams and it’s slim as well, measuring 143mm x 70.5mm x 9.08mm in dimensions.

For those assuming that this piece of hardware is too large to fit in the pockets, fret not – It can slide in and out of the tightest of jeans with ease. What you really have to worry about is the mediocre back panel which is crafted out of polycarbonate just like the one on the Galaxy S3. The look and feel of the casing isn’t sturdy enough and it has the tendency to bend inwards when pressure is applied on the rear. On the bright side, the silver unibody form factor looks beautiful and attractive. The front features a gorgeous 5-inch display and a webcam, coated with Corning Gorilla Glass 2 to stay free from scratches and scuff marks. 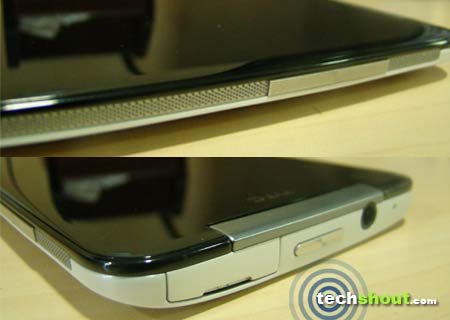 The protective sheet laid here neatly folds into the edges. Speaking of which, the sides can be a bit deceiving. At first you’d think – Wow, look at the speakers on the edges. Once you figure out that the actual speaker is on the rear, you’d realize the sides are just part of the design, dressed in a grille-like fashion. For a handset of such dimensions, we found that the power key which has a spun-metal finish, is positioned on the upper edge and is a downright annoyance to access. This feels like the only component that makes one-hand use inconvenient in the entire design.

Accompanying it is the 3.5mm headphone jack and housings that accommodate the microSIM as well as the microSD card. Head to the lower end and you’ll be presented with the microUSB port that’s encased within a plastic covering. While the volume controls rest on the right with a similar design as the power key, the rear plays house to the main camera, an LED flash, a notification light and the stereo speaker with the Beats Audio branding above it. The phone is also IPX-5 certified, making it resistant to light water sprays. 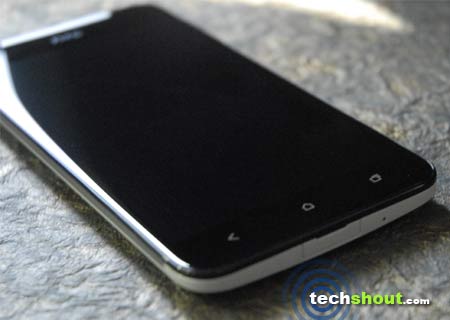 Benchmarks say a lot about a handset’s performance, but they are considered somewhat synthetic in nature. What really matters is real-world performance and how well a device can sustain daily activities. But to give you an idea on just how tough this piece of hardware is, we’ve put it through a host of tests. On GLBenchmark 2.5.1 Egypt HD, we recorded 28fps, while Vellamo’s HTML5 and Metal suites rendered scores of 1852 and 513, respectively. We saw the Windows Phone 8X deliver an impressive 908.1ms on SunSpider 0.9.1 and the device in question managed to attain 1404.7ms, which isn’t bad at all.

An HDTV equivalent screen on a smartphone is definitely something that’s extraordinary and it’s bound to be a standardized approach for future high-end Android devices. As exciting as it may sound, many have claimed having a high resolution screen on such small form factors fails to make the most out of the display. If you were to compare the super LCD 3 panel on the device with other screens like the S3’s HD one, you wouldn’t notice much difference whilst browsing through the Android UI.

The distinction is clearly visible during video playback and viewing top quality images. Visuals are bright as well as vivid and the screen is clearly visible from different angles. And when combined with the Beats Audio enhancement, movie time is truly an enjoyable experience. On the downside, outdoor visibility, especially under direct sunlight is a little below acceptable. Be sure to have a hand free to shield the screen while using the device in the outdoors as even full brightness leaves content unreadable. 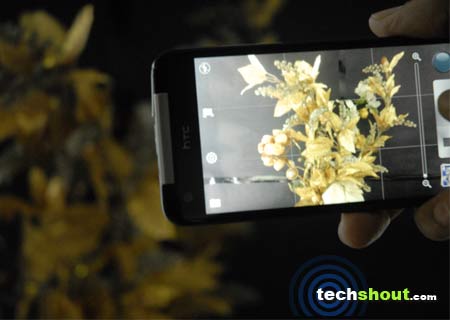 HTC has packed the Butterfly with an 8MP 28mm lens that proffers autofocus, a BSI sensor and an f2.0 aperture. Some of the main highlights of the camera application are the integrated VideoPic, slow-motion video, HDR and panorama features that are self-explanatory. You’ll also get a host of pre-defined lenses for incorporating effects like sepia, negative, vintage and more into images, sans the need for post-processing. One attribute that’s gaining popularity in various smartphones is group shot where the camera takes multiple stills and merges the best snaps into one finish by automatically detecting smiles and faces in each picture.

The snapper’s overall performance is great and images captured in well-lit conditions appear bright and vivid with good color reproduction as well as exceptional levels of details. 1080p videos are clear and owing to integrated stabilization, they turn out smooth and not very shaky. You’ll also get an ultra-wide 2.1MP front lens that can do 1080p recording as well. As appealing the rear snapper might be, we still haven’t seen any smartphone camera take down the 808 PureView. 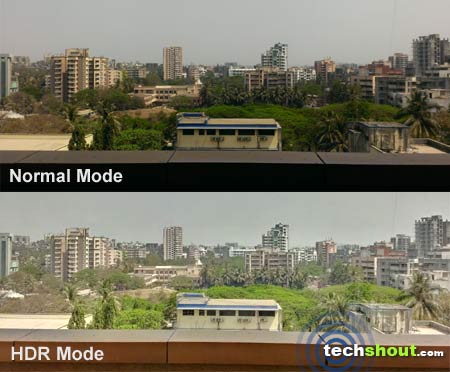 The Sense UI employed here is the same as what we’ve seen in the previous generation One series. Well, the company has disclosed its plans to upgrade the said range along with the Butterfly with the new and refined Sense 5 interface that was launched with the flagship One. We’ve gotten quite fond of the personal touches the manufacturer has implemented. For instance, the task manager isn’t the same as you’d find on other Jelly Bean handsets. The company has thrown in a 3D-like interface, making it unique and elegant. To top it off, the UI packs in loads of customization options which allow you to choose between various lockscreen as well as homescreen styles that are tailored to specific requirements. 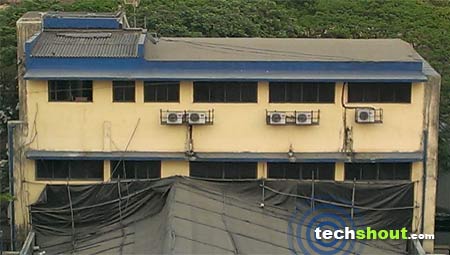 As you know, the Snapdragon S4 Pro SOC is the one responsible for the performance. The chipset basically packs in the Adreno 320 GPU, 2GB of RAM and a quad core Krait processor which is Qualcomm’s very own micro-architecture that’s based on the ARM instruction set, the Cortex A15. From booting up to performing daily tasks, everything works smoothly and compared to Cortex A9 based handsets, the difference in speed is noticeable while carrying out operations, barely through. However, we did encounter lags, mostly while running applications as well as a few games and during video playback.

Speaking of which, certain 1080p clips that aren’t natively supported by the phone refused to play with third-party applications, in spite of the tools rendering support for the encoding. Some worked, but with a sluggish outcome. We carried out the test with multiple apps available on the Play store and obtained absolutely no luck at the end. Coming to the activity life, we managed to achieve a little over 6 hours of high usage with the 2020mAh battery fully charged. Our estimate is based on heavy web browsing for 2 hours, an hour of 1080p video playback and a little gaming, while the remaining roughly 3 hours were spent testing the camera. 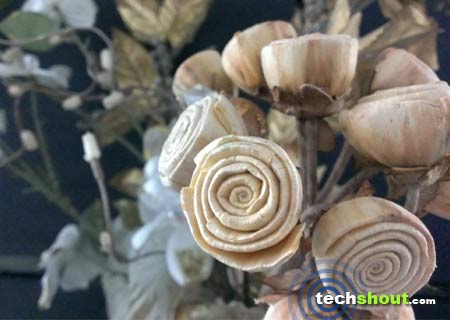 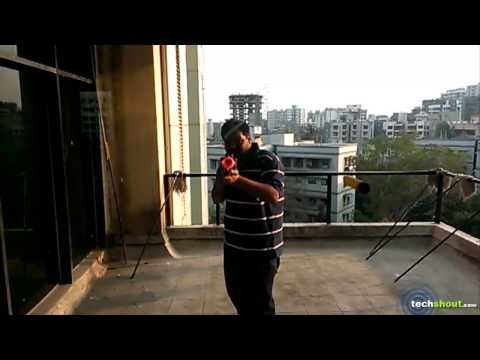 A 440ppi pixel density is clearly an overdose, one that we enjoyed.

Clarity-wise, we couldn’t ask for more from the 1080p super LCD 3 panel and at 5 inches wide, the visual experience is truly remarkable.

As with most HTC phones, the camera quality is noteworthy. The 8MP snapper on the rear is a good performer and the extra features included with the companion application are just the icing on the cake.

We’re not quite content with the handset’s overall build. It looks stylish, but the rear panel doesn’t feel sturdy enough.

The display is barely visible when viewed under direct sunlight, even at full brightness.

While we’ve asserted that one hand use isn’t impossible, reaching out to the power button on the top edge is a bit of a hassle and can put the device in jeopardy of slipping out and crashing to the ground. It would be more convenient having the power key on either side of the body.

We must say – The HTC Butterfly is quietly brilliant, but it still doesn’t quench our thirst for finding an Android handset that can run for a few days without having a breakdown. On a whole, the performance is great and the 5-inch 1080p display is worth drooling over. To top it off, you get the phone wrapped in a sleek form factor that however didn’t quite impress in sturdiness, but is gorgeous looking. What worries us the most is the current price point the company is selling it at. The Xperia Z is retailing for below Rs. 39,000, while the mobile in question has a sub-Rs. 45,900 cost. Considering that the former has a little extra slice of features on its specifications sheet, we could see the latter lose potential customers to the Sony handset. On an ending note, we’re giving the device an 8.8 out of 10 rating.