While the US and other global markets get the One M9, fans in India are being treated to the beefier One M9+ and One E9+ flagship smartphones. But there’s also something new for the budget-minded, the HTC Desire 326G, which is a brand-new mid-range release launching first in this country.

There’s no official price for the handset, but judging by its features, you can expect it to retail under Rs 10000. The HTC Desire 326G looks almost identical to the Desire 526G+ octa core handset which went official at Rs 10400 back in January. The main difference is that the new device has a slightly modified camera casing and toned-down hardware. 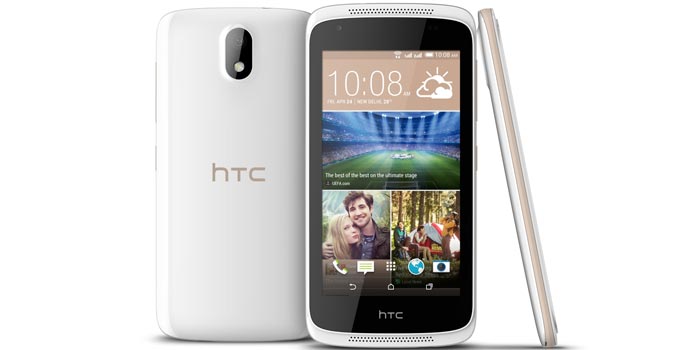 The HTC smartphone is powered by a 1.2GHz quad core Spreadtrum SC7731G processor based on the Cortex A7 and it employs a 4.5-inch FWVGA touchscreen for visuals. There’s no mention of which version of Android the device runs, but 4.4 KitKat is most likely preloaded here rather
than Lollipop.

Also see: HTC brings not one, but two flagship phones to India

The Desire 326G is also dual SIM enabled and it supports 3G networks as well as other connectivity features such as Wi-Fi b/g/n, Bluetooth 4.0 and GPS. The onboard 2000mAh battery will be able to deliver 11 hours of talk time or around 524 hours of standby on 3G. The smartphone also comes with a 2MP front camera and an 8MP shooter on the rear.

Here’s an in-depth look at the HTC Desire 326G’s specs:

The HTC Desire 326G is scheduled to go on sale in India in white sometime towards the end of May.