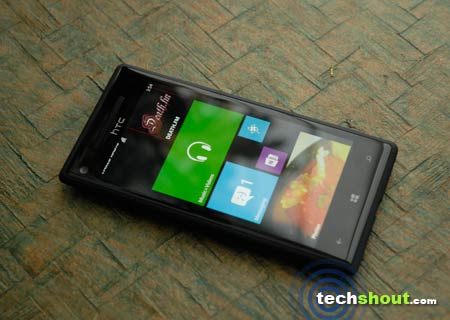 The HTC 8X is the Taiwanese manufacturer’s flagship in the Windows Phone 8 lineup and we’re putting it through a review to see how well it fares in the race. Microsoft’s latest mobile OS made headlines back in June and it was officially announced this past October. We even remember when the device in question was under the rumor spotlight before its introduction in September. Well, that time is far gone and we’ve finally got it in our possession, with a chance to fiddle around and see what HTC has brought to the fight. 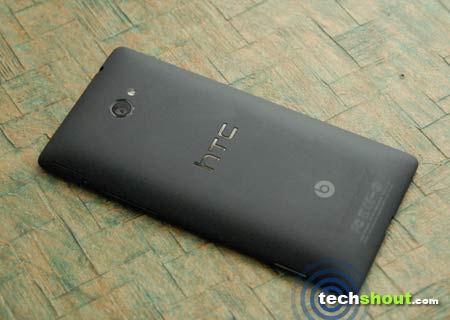 As you probably know, Microsoft has raised the bar with its latest mobile platform. The major improvements here include support for multi-core processors (dual actually), higher RAM and a microSD card slot, which were dearly missed in Windows Phone 7. Additionally, manufacturers can also fit HD displays onto their smartphones with either a 768p or a 720p resolution, albeit some opt not to. On a whole, these improvements sound good, but Redmond is still a step behind compared to the competition. And we’re not talking about hardware only.

Speaking of which, the device has a decent offering of components. For starters, it houses a 4.3-inch touchscreen which employs a Super LCD2 panel proffering a resolution of 1280 x 720 pixels and a Corning Gorilla Glass 2 protective coating. A 2.1MP webcam sits pretty on the front as well, while the flip side is affixed with an 8MP camera. Moving on to the innards, a 1.5GHz dual core Snapdragon processor is accompanied by the Adreno 225 GPU and 1GB of RAM. 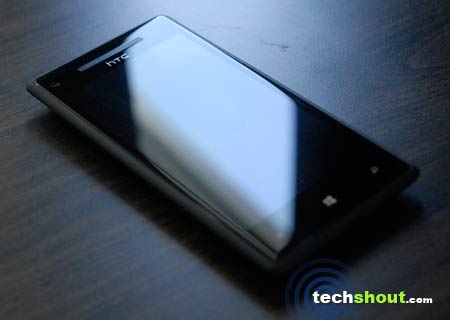 Before we move on, we’d like to answer the question – Why Qualcomm and not other SOC manufacturers? The reason is quite simple. Dual core Snapdragon processors which employ Krait cores are more advanced than the Cortex A9 that is found in the Tegra 2 as well as 3, Exynos 4 and others. For a fact, the latest architecture adopted by the California-based chip maker shares similarities to the ARM Cortex A15 which first made its debut in the Nexus 10 and is soon to be launched through various other devices. This is one of the main reasons as to why the S4 Pro SOC has managed to smoke the competition in benchmark tests.

Disappointment floods in when you learn that the handset only packs in 16GB of storage. And if you’re planning to upgrade from Windows Phone 7 to the latest OS, the device will only carry forward the memory expandability constraints you faced in the previous release. Where connectivity is concerned, you’ll have GPS with GLONASS, NFC, Bluetooth 3.1, Wi-Fi b/g/n and HSPA/4G LTE, the last depending on market location. Lastly, an 1800mAh battery gets things up and running. 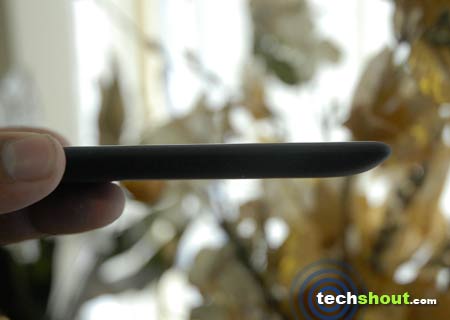 During the WP7 era, Nokia managed to attain high popularity for the impressive devices it offered. No doubt the Titan and Titan 2 were top of the line giants in the ecosystem, but the Finnish manufacturer still stood tall. Well, things could turn out differently with the newest generation OS. The handset is at the frontline of the company’s WP8 portfolio and just by the looks of it, we’re certain that Nokia is in for a rough ride.

Design-wise, the company has done a fine job with the external construction. Slim as the handset may look, don’t be fooled by its appearance. Compared to the 8.6mm Galaxy S3, the 8.7mm Ativ S and the 9.1 mm Butterfly, the phone is one bulky flagship possessing a depth of 10.1mm, which is a tad thicker than the mid-ranged Lumia 820 as well. Despite the design perception which is made possible owing to the tapering curved edges, the form factor couldn’t be more stylish. The handset isn’t entirely light either, carrying a weight of 130 grams. 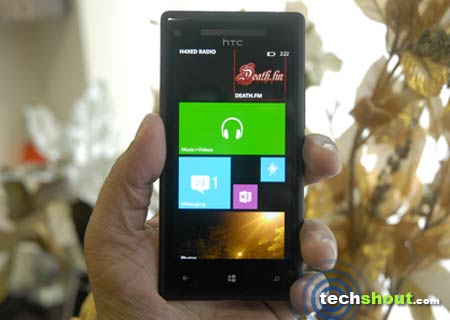 The front is layered with Corning Gorilla Glass 2 which encloses the 4.3-inch HD panel, the webcam and the 3 capacitive buttons on the lower part of the panel, while a small rectangular cutout is made for the earpiece which comes in a matching color with the rest of the body and has a notification light embedded under the grill. Flip the device over and you’ll be presented with a smooth rubberized finish which not only feels good in the hand, but also delivers a firm grip. Here, you’ll find the HTC logo shining away in all its glory at the center with the main camera and flash located on the top. The edges play house to various key components, namely the volume controls, the power/sleep button, the SIM tray, the 3.5mm audio jack and the dedicated camera button. 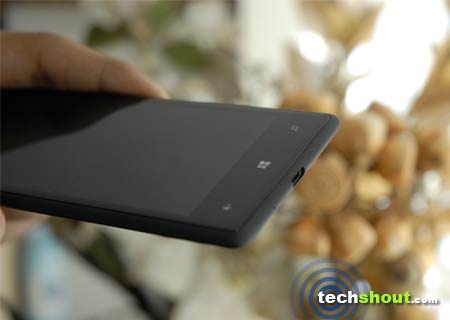 So what does Microsoft’s WP8 platform have to offer? A fluid UI, seamless transitioning between apps as well as menus and an intuitive, hassle-free experience – The list goes on. It may not be as customizable as Google’s mobile OS, but it’s elegant in its own unique way. Compared to the previous iteration, not much has changed appearance-wise. The Start Screen basically crams in more Live Tiles than before, allowing you to resize them down to a smaller dimension, whilst still maintaining a visually appealing design. A simple swipe to the right brings up the app list which has been seemingly passed on to the new platform untouched. The bottom line here is – If you’ve used WP7, you’re going to be no stranger to WP8. Well, there are a few extra features that are more than welcomed.

The Kid’s Corner is one fine addition which basically creates a secondary Start Screen for the little ones. Here, you can configure which games, apps, music and videos can be accessed. The main benefit is that you won’t have to worry about kids accidentally wiping your data, emailing contacts in the address book or any other hassle of sorts. In spite of the many improvements, WP8 is still the underdog compared to Android and iOS. The app ecosystem has grown and the Store has a decent array of applications and games from popular developers. But these aren’t even close compared to what the competition has to offer. On the bright side, you won’t need the Zune software on your PC to sync content onto the phone as the latest OS now comes with MTP support.

Microsoft has nailed the software part, delivering utmost fluidity and smoothness in operations. What we’re going to determine here is the hardware that HTC has opted for. Starting off from scratch, our review unit took approximately 40 seconds to start up and around 10 seconds to shut down – Not the quickest we’ve seen, but acceptable. The display employed on the front which has a Super LCD 2 panel portrays clear, crisp visuals and videos played back at 720p are enjoyable as well as a feast to the eyes. Owing to the screen size, you’ll also get a high pixel density rate of 342ppi compared to the Lumia 920’s 332ppi 4.5-inch PureMotion HD+ panel. The combination of a dual core Krait with 1GB of RAM is just right for WP8, albeit we did notice a little lag while browsing the web with multiple tabs open (6 is the limit) and a few apps frozen in the background. 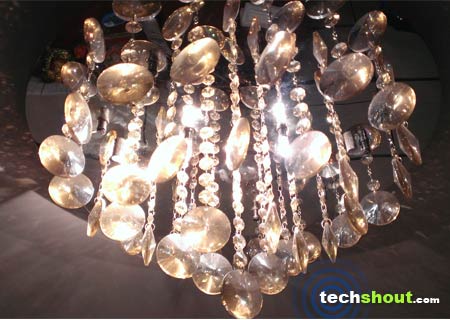 Benchmarks play a vital role in asserting performance, although they aren’t 100% accurate. So for those who want an idea about the device’s performance, it managed to score 231.86 points on WP Bench Free, while the AnTuTu benchmark tool rendered a score of 12249. We also ran it through SunSpider 0.9.1, receiving a pretty impressive 908.1ms. The battery life is another key aspect of a smartphone and the handset has managed to deliver an above average reading. Our normal tests managed to squeeze out 5.5 hours of activity which includes a lengthy 4 hours of online radio, a little gaming with music playback and web browsing for about an hour. The phone was on a 3G network during the tests, with constant Wi-Fi connectivity for internet usage. 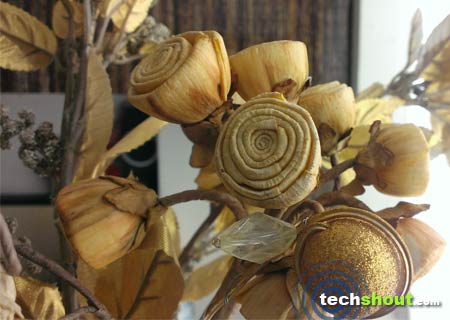 If there’s one feature the Taiwanese manufacturer holds up high in its top-quality smartphones, it is certainly a ‘world class’ camera. And the one employed in the handset is an 8MP snapper that has a 28mm lens, an f2.0 aperture as well as a dedicated ImageChip. The color reproduction is noteworthy and so is the level of details we derived in stills. While capturing macro shots, we noticed that the lens would struggle to focus on objects that were lit up. The cause of the issue was apparently a smudged lens cover. Even the slightest fingerprint marks affect the outcome of renders. The image embedded below says it all. Owing to the BSI sensor, pictures and videos turned up pretty clear in dimly-lit conditions as well. You can check out the clip posted below for a brief idea on the snapper’s low-light 1080p recording capability. 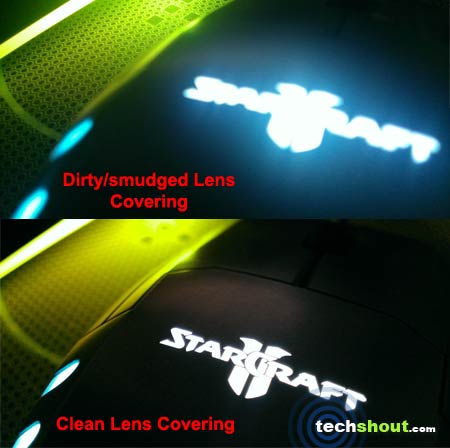 An elegant OS combined with a smartphone that proffers a minimalistic, yet glamorous design is what the handset is all about.

The display is beautiful, portraying crisp visuals with realistic colors.

Adding to the rich entertainment experience is the Beats Audio enhancement which made music listening a lot better on the handset.

A lot of applications and games aren’t optimized as yet to make the most out of the higher resolution, resulting in wastage of screen space. And the WP8 app ecosystem could use a lot more love from developers.

While the design and hardware are just compelling, 16GB of built-in memory isn’t quite enough for storage.

The pretty good 8MP camera is weighed down by the simple companion application which lacks a lot of features like HDR and panorama to name a few.

The camera, power and volume buttons are rather slim and hard to access.

To wrap things up, the HTC 8X has definitely earned its right to be a flagship smartphone. And in spite of a few drawbacks, it makes one fine WP8 handset. Well, we hate to say it, but Nokia has a competitor it ought to be worry about, regardless of the PureView technology’s existence. We’ve giving the device a good 8.7 out of 10 rating. The phone is available on-contract in the US through T-Mobile and AT&T for $49.99, while Verizon is selling it for $99.99 with a 2-year agreement. Those looking to buy it in India will have to cough up around Rs. 35,781.