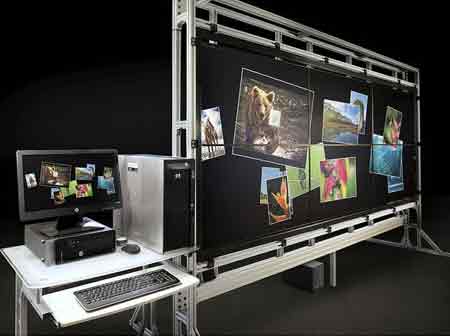 The HP VantagePoint has lately been creating headlines not because of the interesting name, but rather its massive 132-inch diagonal touch surface which boasts of 32 simultaneous touch points. This commercially viable wall has been designed with six HP LD4730G Micro-Bezel digital signage displays.

The aforementioned six displays are each placed in a 3 x 2 grid to appear as an 11-foot wide and 7-foot high touch surface. Furthermore, these screens are protected by a layer of Corning Gorilla Glass to stand the test of time since they are expected to be installed in places such as office lobbies or other large spaces. The wall proffers ultra high resolutions of 4098 x 1536 pixels and extends support to next generation HD content. Plus, it runs Windows 7 Professional, making it easy for owners and software professionals alike to create content.

This latest offering employs the high-end dual core Hewlett Packard Z800 workstation which enables the huge setup to deliver video processing functions. Additionally, it’s integrated with the company’s Photon Engine, allowing the system to run both 2D as well as 3D apps for an enhanced user experience. It has also been pre-loaded with apps for a range of sectors including showrooms, retail, financial services and automotive amongst others.

The HP VantagePoint is now available in the U.S. and Canada and is retailing at a price of $125,000.