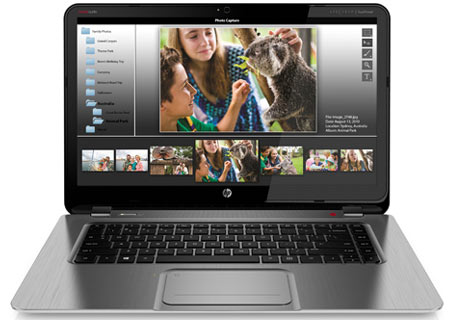 Along with the Envy x2, the HP Spectre XT TouchSmart Ultrabook has been revealed, offering Windows 8 and promising a ‘premium touch experience.’ And although it’s not quite like the hybrid device we mentioned above, its touch capabilities go beyond the standard keyboard and mouse feel.

The device sports a 15.6-inch Radiance Full HD display infused with IPS technology. And while it doesn’t reflect size zero, it’s just short of 20mm thick and weighs slightly less than 5 pounds. It also features edge-to-edge glass and an all-metal design, as well as a glass touchpad, a soft-touch base and speakers with Beats Audio technology.

The XT TouchSmart is the first notebook from HP to feature Intel’s Thunderbolt interface for transfer of data, music and other media to external hard drives. To add to that, it also comes with a lot of other Intel stuff, such as the latest Intel Core processors, Intel’s identity protection, anti-theft, smart response and smart connect technology, plus an mSATA solid-state drive with Rapid Start. Making it even faster and more media-friendly are its Gigabit Ethernet, USB 3.0 and HDMI ports.

The sleek Ultrabook also comes preloaded with a host of software such as Adobe Photoshop Elements 10 among others and a few of HP’s exclusive technological offerings like CoolSense, Imagepad and ProtectSmart. An HP TrueVision HD webcam has been included, as have the applications Connected Photo and Connected Music.

The HP Spectre XT TouchSmart Ultrabook price and release date information has been officially announced. It carries a seemingly steep starting price of $1,399.99 and is expected to hit US customers in December this year.