HP loves experimenting with Android and it looks like it’s prepping a 17-inch AIO desktop dubbed the Slate 17 which will run on Google’s mobile OS. A benchmark listing has popped up online highlight the possibility and also revealing a good deal of information on the device.

Chinese website Juggly spotted the PC at GFX Bench. The HP Slate 17 isn’t the first AIO from the company to offer Android. The company has already launched the Slate 21 and Slate 21 Pro desktops which feature 1080p FHD displays and Tegra 4 processors from Nvidia. The upcoming one will have a 17.2-inch touchscreen and it’ll proffer visuals at 1920 x 1080p as well. 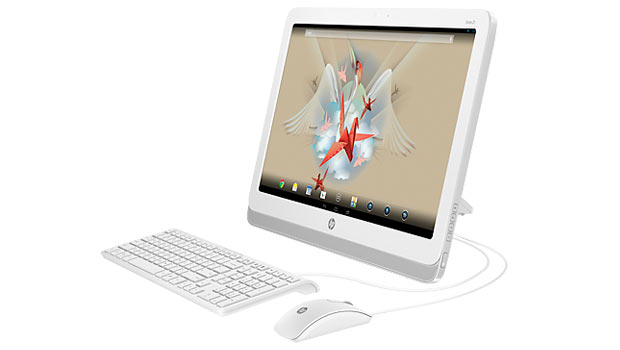 HP has mostly sided with Nvidia for chips in its Android products, but this time it looks to be giving Intel a chance to prove its capabilities. The Intel Celeron N2807 SOC will be fitted into this AIO clocked at 1.58GHz and while it’s shown to have a quad core configuration, the chip is actually a dual core one with two threads, notes Liliputing.

What’s more, the SOC is listed as 64-bit ready on Intel’s website and is accompanied by Bay Trail HD graphics. Android 4.4 KitKat runs the show here and there’s 2GB of RAM as well as 32GB of storage for memory needs. A 1MP front webcam will also be present.

We’ve rounded up the HP Slate 17 specs below:

Liliputing also highlights that HP normally integrates batteries into its AIO PCs, so the Slate 17 is most likely to be touted as a portable Android PC. You might also be able to use the device as a monitor for other devices.