Modern executives and mobile professionals is whom HP is planning to target with its newly unveiled Pro Tablet 608 which happens to grab pretty high-end specs. It’s supposed to hit commercial sales channels during the middle of July for $479 with Windows 8.1 onboard. Once Windows 10 becomes available, models with the said OS will be released as well.

The new HP Pro Tablet 608 grabs a 7.9-inch display which offers its visuals in a 2048 x 1536 pixel resolution. A portable dock will be offered along with it, bearing ports for a monitor, HDMI, USB and RJ45. This accessory will also allow the tablet to be charged using it.

Another accessory is of course a folio keyboard that connects to it magnetically, much like on the Microsoft Surface range. The Pro Tablet 608 will be available for purchase in the form of 64GB and 128GB models and with 2GB or 4GB of RAM. A highlight is the fact that it will kick in a USB-C connector for charging and using peripherals. 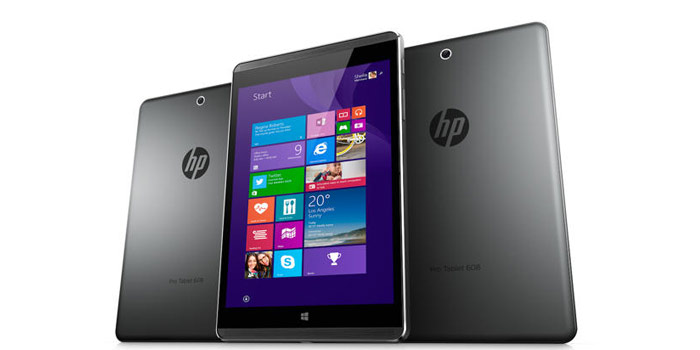 This new HP device comes fitted with an 8MP rear camera and a 2MP front snapper. It promises 8 hours of battery life and boasts of connectivity features like 802.11ac Wi-Fi, Bluetooth 4.0, optional 3G and 4G and NFC.

Like we said, the new HP Pro Tablet 608 will begin arriving in the market in mid-July with its starting cost set at $479. It will come pre-installed with an updated version of the company’s Touchpoint Manager suite.