The HP Pro Tablet 408 G1 seems to be yet another premium Windows tablet from the US-based company. Although it hasn’t been officially announced yet, it has been listed on its website nonetheless. The price of this product has been kept a secret, but we’re guessing all will become clear at CES 2015 which is slated to commence on January 6.

Said to fall in the affordable tablets category, the new HP Pro Tablet 408 G1 features an 8-inch 10-point multitouch display on its front surface, which showcases its visuals in a resolution of 1280 x 800 pixels. It can be ordered to come installed with either Windows 8.1 Pro or Windows 8.1 Pro with Bing. 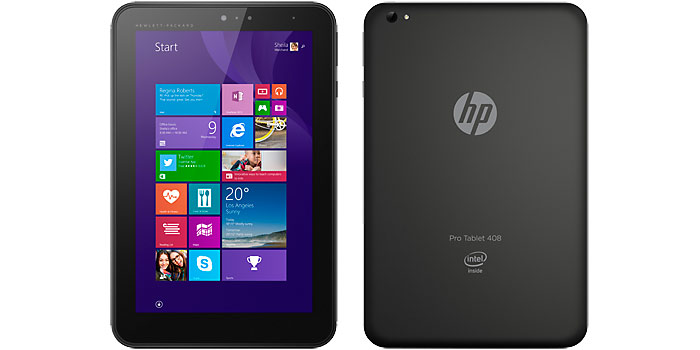 Inside this HP tablet runs an quad core Intel Atom Z3736F Bay Trail processor which offers a clock speed of 1.33GHz, apart from 2MB cache and 4 threads. This unit is accompanied by Intel HD graphics and 2GB worth of RAM to complete its core setup.

The Pro Tablet 408 G1 looks to satisfy the imaging and video shooting needs of its buyers with an 8MP rear snapper that sits beside a flash. On its front furthermore, there’s a 2MP snapper meant for video calling and selfies.

Like we said, the HP Pro Tablet 408 G1 is most likely to make an official debut at the upcoming CES expo in Las Vegas, so stay tuned for updates regarding its availability and retail value.