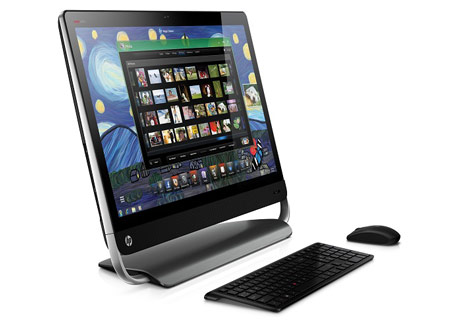 Although the CES 2012 is just a week away, the guys over at Hewlett-Packard seem to be a bit too impatient as they’ve let loose the HP Omni27 AIO desktop and the HP Pavilion HPE h9 Phoenix PC ahead of time. Both rigs are expected to be available starting January 8, 2012 in the U.S.

Designed to deliver high performance and an enhanced visual experience, the HP Omni27 AIO desktop features a flat-panel HD display that stretches up to 27 inches diagonally. For additional viewing comfort, the screen sports edge-to-edge glass and can be conveniently adjusted up to a 25-degree tilt. This PC rig is equipped with HD graphics, 2TB of storage capacity and various other features including Beats Audio, an HDMI port, options of a Blu-ray drive or a TV tuner card and multi-core processors. To top these off, the AIO computer embeds the HP Magic Canvas software over the Windows OS.

Claimed to be one of the most powerful rigs within the HP Pavilion series, the HPE h9 Phoenix PC has its intentions focused towards professional use. Design-wise, this computer is built with an armor-plated form factor that covers most of its structure. Furthermore, it comes bearing a few exclusive features such as HP Magic Canvas, HP LinkUp and Beats Audio. The HPE Phoenix can house up to 16GB of DDR3 RAM and is equipped with 3 internal bays for hoarding HDDs, a discreet GPU and an optional liquid cooling system to cut down excessive heat.