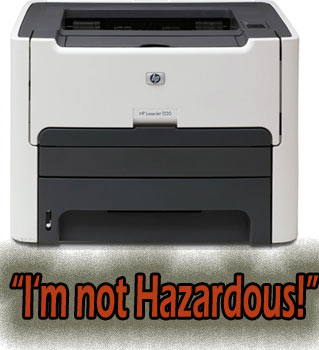 Earlier this week, we had reported about a study that revealed that certain office and home laser printers could pose as a health risk. Among other printers, the study by Australian researchers included some Hewlett Packard models.

Now, HP reacted by issuing a press statement that actually rejects the results of the Australian study.

The statement reads: “After a preliminary review of the Queensland University of Technology research on particle emission characteristics of office printers, HP does not agree with its conclusion or some of the bold claims the authors have made recently in press reports.”

In the study, the laser printers were classified based on the emission levels as high, medium or low emitters and no particle emitters.

The study found that high emitters included the HP LaserJet 1320 and 4250, which when printing increased the particle number in the surrounding air more than tenfold.

HP has come out strongly against this study, saying that the company hopes to learn more from the study authors about how products were chosen for the study, how ranges were determined given the fact that no standards exist, and many other factors that could have influenced the results.

Hewlett Packard also mentioned that testing ultra-fine particles is a very new scientific discipline and there are no clear indications that those emissions are indeed a health risk.

“Specifically, HP does not see an association between printer use by customers and negative health effects for volatile organic compounds, ozone or dust. While we recognize ultra fine, fine, and coarse particles are emitted from printing systems, these levels are consistently below recognized occupational exposure limits,” the statement concludes.

HP has also expressed its opinion that more testing would be needed. The company also said that it is already collaborating on this issue with leading independent authorities such as Air Quality Sciences in the US and the Wilhelm-Klauditz Institute in Germany