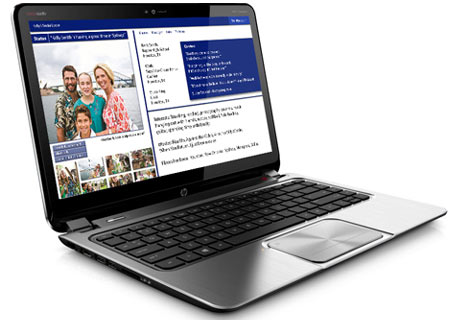 The HP Envy TouchSmart Ultrabook 4 release date has been announced by the American multinational corporation along with a few interesting details about the laptop. The IFA it seems is a good platform for the makers of electronic gadgets, as can be seen by the hordes of new products announcements flying out. Other HP reveals include the Spectre XT TouchSmart Ultrabook as well as the Envy x2.

The new Envy Ultrabook features a multitouch HD display spanning 14 inches in addition to an ‘eye-catching’ metal design. Weighing the same 4.7 pounds as the XT TouchSmart, it is slightly thicker, measuring 23mm in that respect, and is capable of offering up to 8 hours of battery life. It also comes with a backlit keyboard and a TrueVision HD webcam.

For those who love their media and music on the go, the Envy 4 packs a subwoofer with Beats Audio in order to add realism to movie and music experiences. There is also the optional AMD graphics solution with 2GB of memory for those who want an extra boost. No other hardware specs have been revealed at this time, except for the fact that users will have latest Intel processor and solid-state drive options.

Apart from the hardware features, the Envy 4 also has a variety of software solutions including the likes of CoolSense, Imagepad, ProtectSmart, Connected Photo, Connected Music and Connected Backup.

The HP Envy TouchSmart Ultrabook 4 release date has been given a broad mention. Expect it to arrive in the US in time for the holidays. Pricing has not been revealed yet and will be made known at a later date, the company says.