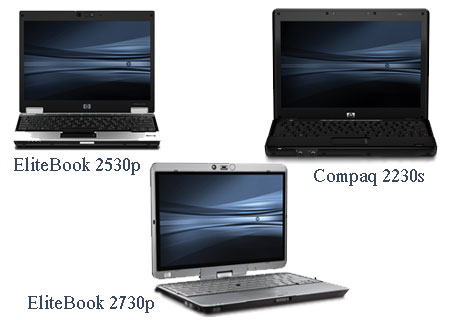 The EliteBooks are the ultra-thin tablet PCs while the HP Compaq 2230s is a series of most comprehensive ultra-portables in the market claims HP.

The EliteBook 2530p and EliteBook 2730p weigh 3.19 and 3.7 pounds respectively and claim to be the lightest from HP. Both the EliteBooks feature latest Intel processors that include the Intel Core 2 Duo ULV or LV and SSDs and an up-to-date wireless technology.

They also feature an inbuilt 2 megapixel webcam, business card reader, HP NightLight that makes the keyboard in low light. The keyboard the EliteBooks feature are spill-resistant, something that previous EliteBooks from HP have been sporting. Also featuring is the shock-resistant hard drive.

The 2530p is the smallest and the lightest of both with a 12.1 inch diagonal widescreen. It sports HP Illumi-Lite LED Display that makes the display lighter than the conventional notebooks with the advantage of enhancing the battery life by 90 minutes. With it comes the option of upgrading the notebook with either smallest 1.8 inch hard drive with integrated optical drive or a higher 2.5 inch drive. The notebook has been made rugged with HP DuraCase for business people on the field.

The HP EliteBook 2730p notebook PC promises to deliver a high-performance and is a convertible tablet that whose screen can be twisted and convert into an ultra-light notebook PC into a pen-based tablet. It features include a new integrated touchpad, tablet buttons and a jog dial. Built to work for frequent travelers, it has the optional ultra-slim battery accessory that offers up to 12 combined hours of battery life. The HP EliteBook 2730p also comes integrated with DVD+/-RW drive.

The HP Compaq 2230s notebook PC weighs a 4.07-pound and comes with a 12.1-inch diagonal widescreen display. Described as the ‘stylish’ of the lot they come with a satin, reflective, black-on-black surface. The technical specifications include Wi-Fi-certified wireless local area network (WLAN) and integrated Bluetooth. These notebooks also sport the cool HP 3D DriveGuard. The HP 3D DriveGuard protects the hard drive against bumps and drops by using a three-axis accelerometer to detect sudden movement and initiate defensive action.

The HP EliteBook 2530p and HP EliteBook 2730p are suggested to be starting at $1,499 and $1,670 of US street price, respectively. They are expected to hit the market by early September.

The HP Compaq 2230s series is already made available in US, starting at U.S. street price of $999.