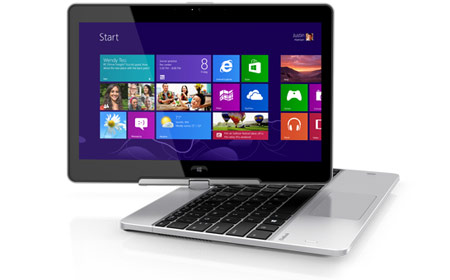 The release date of HP EliteBook Revolve has been pegged for March next year, as the company has announced the touch-based notebook, expanding its portfolio for businesses. It pivots and can be folded to expose its tablet doppelganger, similar to other hybrid devices we saw at this year’s IFA such as the Dell XPS Duo 12.

The device has been optimized for Windows 8 and targets business customers with a need for a laptop as well as a touchscreen tablet. It runs on third-generation Intel Core processors, and as HP claims, delivers the performance and visuals of a full-fledged notebook coupled with the ease of functioning that a touch-enabled gadget brings.

The portable computer comes with Windows 7 Pro or Windows 8 Pro and features an 11.6-inch display which automatically adjusts its brightness, orientation and other attributes. A full-sized, back-lit keyboard assists in quick typing, while an optional pen further enhances usability. Users will find Corning Gorilla Glass 2 protecting the screen from scratches and scrapes, and a chassis made completely out of magnesium, incorporated into a 3.04-pound package. 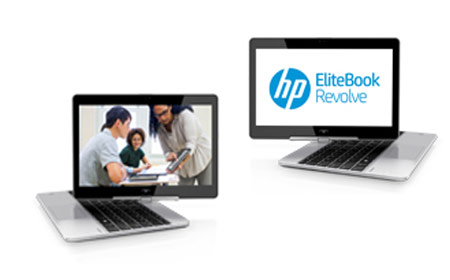 When it comes to multimedia, the EliteBook Revolve carries on its exterior a 720p HD camera for video conferencing and other such communication face to face. There is also a dual-microphone array which, in conjunction with DTS studio sound, should deal out decent audio quality. In addition, CyberLink YouCam software will be included, allowing users to create HD videos for the web.

On the connectivity front, there is WWAN, DisplayPort, USB 3.0 as well as secure NFC. These features have been included to allow the device to communicate with other gadgets and networks for office purposes. It will come packed with a few IT tools such as Active Directory, PXE boot support as well as HP Client Security.

In addition to the aforementioned notebook, HP has revealed a new multi-tablet charging module, and the company expects it to find a place in the office environment. The kiosk will be able to dock and charge up to 10 tablet PCs at a time with a single power outlet and it even secures devices docked via a locking mechanics and a keyed lock.

The HP EliteBook Revolve is scheduled to be made available in the US starting in March 2013, while pricing will be revealed at a time closer to launch. The company’s multi-tablet charging module will hit US markets in January 2013 at $499.