After leaking out a couple of days back, the HP Chromebook 11 has now made its debut in the US and the UK. The new laptop is said to be highly affordable, have enhanced security features and designed for everyone. It can be ordered for $279 with shipments starting this week itself.

Unlike its larger sibling, the Chromebook 14, from HP, this one doesn’t come with an Intel processor. Instead, the company has opted for an ARM chipset, the Exynos 5250, which was initially used on Samsung’s previous Chromebook. The laptop falls in the 11.6-inch segment and Google notes that the display is one of the key features of the device. 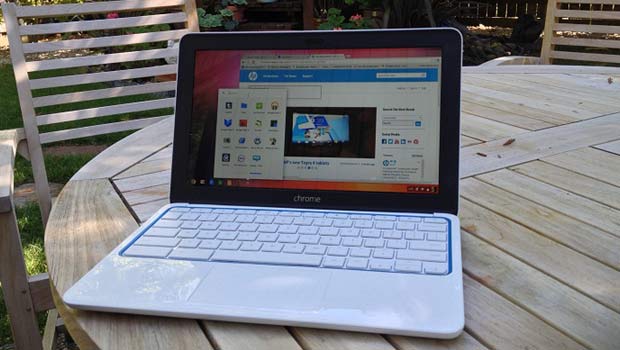 The IPS panel delivers 300nits of brightness, 1366 x 768 pixel resolution, wide viewing angles of 176 degrees and 60% color gamut. Coming to the design, HP has crafted its Chromebook 11 to be highly portable and durable. The magnesium frame adds to the sturdiness, while the overall weight is listed at 1.04kg.

The most interesting part here is that the HP Chromebook 11 comes with a microUSB port for charging which is the same hardware that’s used in almost every Android phone out there. Google has also thrown in various freebies such as 100GB of Drive storage for 2 years, a 60-day trial of Play Music All Access and 12 sessions of GoGo Inflight internet.

The Chromebook 11 is now available for purchase through Best Buy, Amazon, Google Play and HP Shopping in the US, while Currys and PC World are also selling it in the UK.