We’re about to show you exactly how to reload chunks in Minecraft because textures and assets can sometimes get buggy in a sandbox game such as this one. After all, it’s a procedurally generated game originally built on Java. Even if you don’t need this information right away, you might have to reload chunks in order to fix visual bugs and glitches in the future.

What Are Chunks In Minecraft?

Chunks are a 16×16 block area which also includes the 256 blocks underneath each surface block that is found on the Y-axis corresponding to this area. It totals 65,536 blocks and is loaded as soon as you enter its vicinity. As you move through your Minecraft world, chunks get loaded on the basis of the direction you walk in.

Why Do Chunks Become Buggy?

Minecraft chunks are constantly getting rendered and de-rendered at every turn during your playtime. You might see the horizon disappear behind you and assume that’s because it is outside your field of view. But that’s not the case. Once a chunk is outside your draw distance, it gets de-rendered. In the same way, chunks get rendered once they enter your draw distance.

Due to this constant influx and efflux of chunks, the assets can sometimes become buggy and unstable. This is why it is advisable to reload chunks when you face problems in your game.

How To Reload Chunks?

On all other editions/platforms besides the Minecraft Java edition (JE) on PC, the only way to reload chunks is to just log out and sign into the server again. This will force the chunks to reload and will remove any bugs that might’ve plagued them during your previous session of play.

In the Java version, things become a lot simpler. You can obviously quit your current session and log into your server again. This will reload Minecraft chunks. But the JE offers a solution that does not require you to quit your game. You can hold down the F3 key and then press the A key.

You will know whether this works when you see the game reload visible chunks all around you. Depending on the specifications of your computer, it may take some time for this process to be completed. Remember, it only works in the JE and nowhere else.

Pressing F3 only in Java pulls up the debug screen. There are other functions you call up by clicking F3 along with the keys mentioned below –

How To Reset Chunks?

Before we learn how to do that, we need to distinguish between reloading and resetting chunks. Reloading chunks just re-renders the chunks into your game. Resetting completely removes loaded chunks and any mods that are associated with it.

Your world will not stay the same after resetting aka regenerating. That’s right — you will lose all your progress including your cool farm buildings, houses, castles and what not. So keep that in mind before you try this.

Now why would you need to hit the reset button? Sometimes, when your world becomes too large, game performance may take a hit. In instances like this, a temporary solution would be to delete an active chunk or two from your world to alleviate the performance lag.

As long as you have a computer, you should be able to reset chunks within your Minecraft world. Before doing this, it is advisable to create a back-up of your game world. It can be found in the “.minecraft” folder under the “%appdata%” file. Just hit Run and search for “%appdata%”. To know how to create a back-up in detail, check out these helpful articles on it by Mojang. You need third-party apps in order to reset chunks in your Minecraft world. For the Java Edition on PC, you can use the program dubbed MCA Selector. You’ll need to open your game world in this app to start editing your chunks.

Once you download it, select File and then Open Region. Next, you need to navigate the location of your world’s folder under AppData. The entirety of your Minecraft world is nestled under the region folder. When you open a segment of your world, you will see a grid representation of it in the MCA Selector app.

Each square in this grid is a chunk in your world. Selecting the squares turns it orange. You can select all the chunks you want to edit out of your game and then hit the reset button. To do this, click on the Selection menu item and then hit Delete Selected Chunks. This will turn the grids you have selected black in color, which denotes deletion of the chunks corresponding to the grids.

Once you’ve done that, you can load into your world and find that the chunks have been reset into their original states. 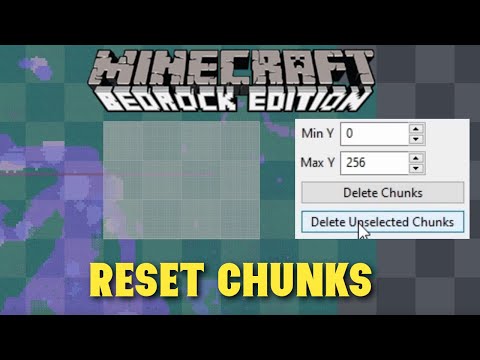 For the Minecraft Bedrock edition on PC, you’ll need to use a different third-party app called Amulet. And the process here is a bit different from what we’ve explained for the MCA Selector. You can learn how to use Amulet by checking out the above video.

How To See Chunk Borders?

In the Minecraft Java Edition, you can hold down F3 and press G on your keyboard to bring up the chunk grid. The chunk grid in the game is represented by a multi-colored wireframe that moves when you transition from one chunk to another.

This wireframe will only appear in the chunk that you’re currently standing on and when you move to a different one, the multi-colored grid frame then shows the boundaries of that specific chunk in the game. To disable this feature, hold down F3 and press G again. To properly see the actual size of the chunk, go higher in creative mode and then look down. You’ll get an accurate idea of how big a chunk really is. In the Minecraft Bedrock edition, there is no real way to see the chunk borders. The grid-frame tool doesn’t exist in this edition. There is a way to predict the borders of a chunk in this edition using math. But why would you go through all that trouble? After the recent update, anyone who owns Bedrock will own the Java edition and vice-versa. Just switch to Java and use the border tool.

Reloading and resetting chunks have entirely different consequences. Resetting will delete chunks and anything you’ve built on them. There is no way to bring a deleted chunk back unless you’ve already backed up your world folder which we advise you to do before using the MCA Selector or the Amulet tool. When you experience a problem with your game world, always reload first. Only use the reset option to regenerate chunks if reloading chunks doesn’t work.