How To Play Angry Birds 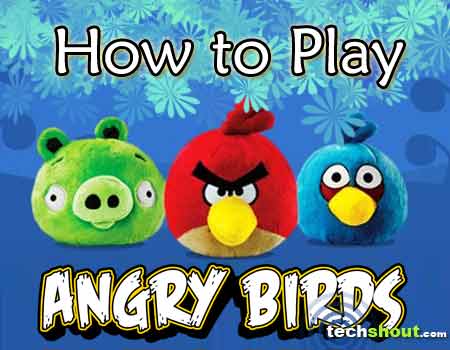 If you don’t know how to play Angry Birds, well then, you’ve been missing out on a whole bundle of fun. The game that took the world by storm ever since its release back in 2009 is available on a wide range of platforms. So it’s quite hard to miss even if you’ve been living in recluse since then. Just name the system and you’ll find that the green pigs and irate birds from Rovio’s barn have invaded them all. Some of these platforms include iOS, Android, Google Chrome, BlackBerry Tablet OS, Facebook, Windows Phone 7, PC, Mac OS X and PSP. 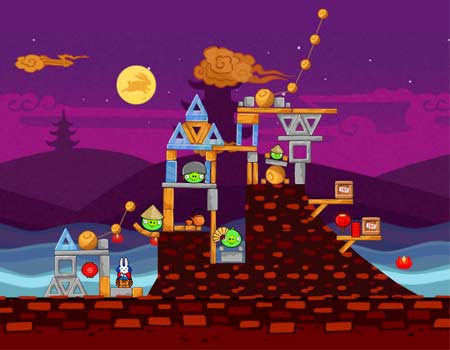 Whatever device you choose, the aim of the game still remains the same. You are tasked with annihilating those nasty green pigs by tossing avian creatures into the air with the help of a wooden slingshot. Sounds easy, doesn’t it? Well, here’s the twist. The green mean gang isn’t hopping around in the open. They are instead found hiding behind crude structures that are crafted out of different materials like wood, stone and ice. Your job is to get through to the enemy even if it means breaking down the barriers that separate you from your prey. 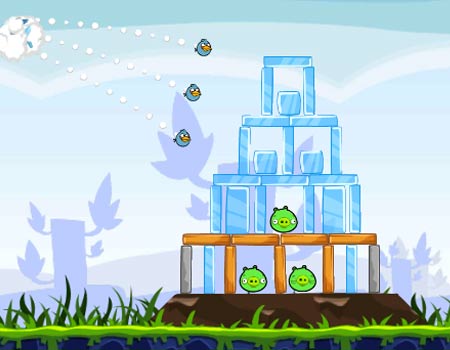 You’ll be supplied with fine feathered friends that are blessed with different abilities, which will help you eliminate any obstacle that stands in your way. Unlike other games, you’ll be able to play Angry Birds by relying on ‘feather-power’ instead of ‘firepower’ to eliminate the enemy. First up is the Red bird. This little chirper doesn’t possess any special powers and can only be hurled at the foe. And while the Yellow one has the ability to perform a sudden boost, the Blue bird can split up to become a trio of critters instead of one. 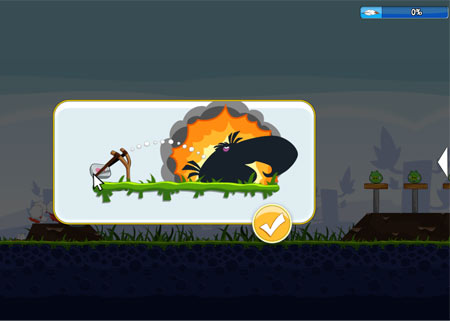 Then there’s the White bird who can drop an explosive egg as it flies overhead. The Black bird, on the other hand, explodes onscreen when required. While the Green bird acts as a boomerang, the Big Brother bird is bigger and more powerful than its Red counterpart. Furthermore, the Orange one puffs up like a balloon at a birthday party. And last but certainly not the least, we have the Mighty Eagle. This one is truly a doozy as it makes a big explosion on impact which is great for tackling tough stages that might leave you pulling out every last strand of your hair. 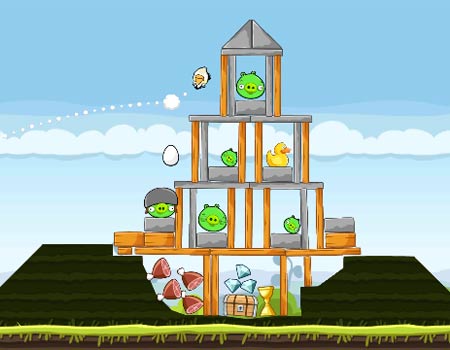 When attempting to play Angry Birds, be sure to put on your thinking cap as the game isn’t just about hurling feathery creatures at the ugly odd orbs. No, it’s definitely much more puzzling than that. It’s about strategy, planning your every move and using your birds wisely. For one, each stage only offers a limited number of irate avians that must be taken advantage of in an intelligent manner to break the structures and get rid of the pigs. Exploit the various attributes harbored by each flying critter to strategically hit the make-shift constructions erected by the green fiends. We suggest that you first observe the structure and take into account the pre-determined arrangement of the different birds that have flocked up neatly in a row behind the catapult. 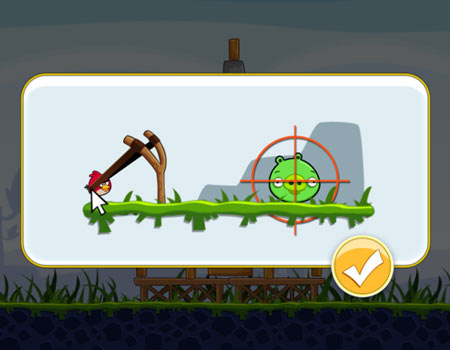 Once you’ve scoped the area, pull back on the sling with your finger, cursor or stylus depending on the gadget you’re using, aim at a particular point and release the appendage to deploy the bird. Now watch as the chirpers soar through the air in an effort to break down the barrier. What’s more, the previous fluffy volunteer leaves a trail of dust in its wake, which helps you to determine your next route. For the birds that possess fantastic capabilities, you’ll be required to tap on the screen when the need arises. For example, if it’s the tiny Blue one that has the ability to split into 3 individual beings, after sending it into the air, wait for the right moment and tap anywhere on the screen to invoke its ‘split personality.’ It will then multiply into 3 and cause thrice the amount of damage. 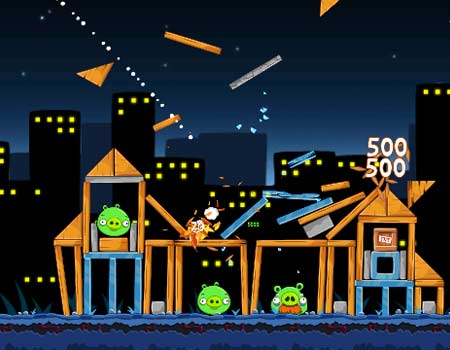 Remember, in each stage, you’ll have to utilize only the birds that are present onscreen. So proceed with caution and execute gameplay keeping this factor in mind. If you run out of ammo and there are still pigs grunting at you in a mocking manner, then it means you’ve failed to complete the level and must start that particular one all over again. What’s more, the next stage gets unlocked only after you’ve successfully completed the previous one. Learn from your past errs and remember, practice makes perfect, so don’t sigh at the first sign of failure and give up that easily. Look on the bright side, the failure would make you loathe those green pigs as much as the fluffy birds do. There are also tons of videos by Rovio as well as fans of the title, displaying the best strategies that can be used to conquer each level. So take a peek at those. 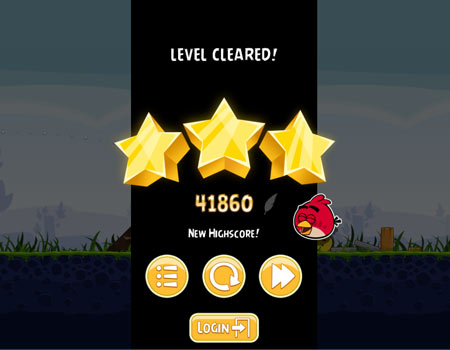 So the mere fact that you’ve come this far into our guide indicates that you’re really determined to play Angry Birds the right way. In this walkthrough of sorts, we’ll also tell you the best way to rake in those big numbers on the scoreboard. Points are awarded for each pig that goes down as well as for the destruction caused to the foe’s structure. With each plank, ice block or stone that breaks, you’ll get high digits. Players are also bestowed with points for any unused birds. Once each level is successfully completed, you’ll receive either 1, 2 or 3 golden stars based on the score acquired. And you can revisit unlocked stages time and again to better your previous score and earn additional stars and points. The company has also thrown in a few golden eggs which are looked upon as a collection of hidden eggs that unlock bonus content. 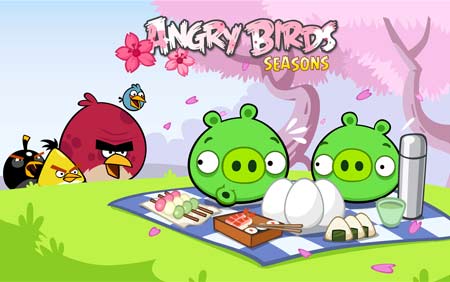 Angry Birds classic was the first title to grace the mobile scene 3 years ago. Rovio keeps on adding new levels to the game at regular intervals. Seasons released a year later starting with ‘Trick or Treat,’ which was just in time for Halloween. Other Seasons titles crafted exclusively for different festivals and occasions are always cropping up. In 2011, the Rio edition was unleashed in collaboration with the animated film Rio. Then just recently, the popularity of these apoplectic avians literally ‘skyrocketed,’ which gave rise to a Space version. There is also a Chrome edition of the game which can be played through the Google browser itself. 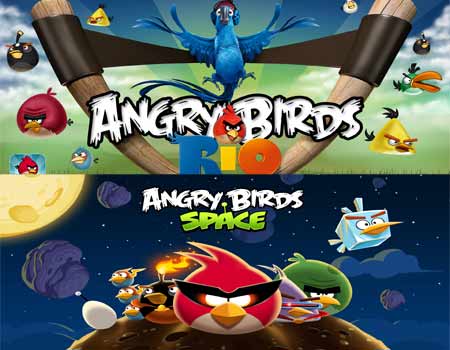 Now that you know how to play Angry Birds, you can set out on an adventure to conquer all the different games categorized here. You can even bet your bottom dollar that you’ll have loads of fun smashing the feathery chirpers into the greedy hogs. Do let us know what you think about this craze that has everybody ‘watching the birdy.’