UPDATE: Facebook Credits has been discontinued. The company has finally admitted that it merely complicates the already complicated online transaction process. So if you have any Credits left over in your account, they will have been auto-converted to your local currency. You can continue using the balance amount to make purchases in apps which have shifted back to sanity.

If you’re itching to know how to get Facebook credits, well then, you’ve stopped by the right page. The social network site lets you do so much more than just helping you keep in touch with loved ones. It’s a complete entertainment package that allows you to stay tuned in 24×7. With Facebook applications being downloaded on handsets and tablets, you‘re always connected to all the action that takes place on the website. Besides surfing through your friends’ profiles, pictures and videos, you can also share in the fun of playing a variety of games together. And you can bet your bottom dollar you’ll never get bored of the impressive lineup Facebook has in its kitty. 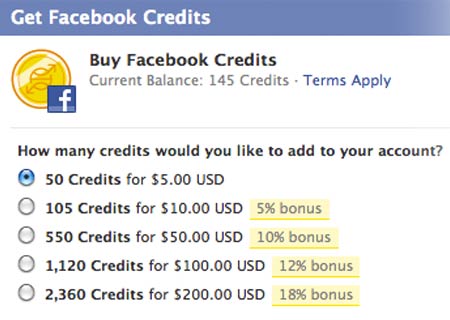 Before jumping into the intricacies of the different acquiring methods, let’s take a minute to analyze these things called Facebook credits. As the developer of the site puts it, ‘they are just like tokens at an arcade or amusement park.’ With the credits, you can purchase virtual and digital items from within the platform itself. This virtual currency can then be used for games as well as other non-gaming apps. Wondering what’s the equivalent of 1 dollar in the Facebook world? Well, if you should shell out 1 bill with George Washington staring back at you, you’ll receive 10 credits. 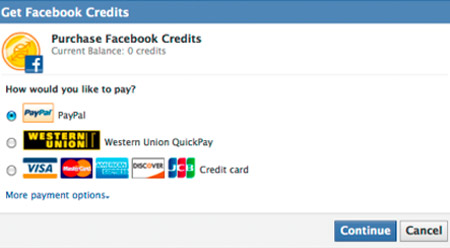 Social butterflies can purchase credits by utilizing their Paypal accounts, credit cards and mobile phones, among other methods. According to the maker, the site supports more than 80 payment schemes, which allow users from all across the world to buy their desired amount in a number of ways. For example, if you’re located in the US, you’ll be able to take advantage of SafetyPay, Travelers Express MoneyGram and Western Union QuickPay while those situated in India can avail of Moneybookers, Visa Electron, MOLePoints and Western Union QuickPay.

Fans of the social networking site strewn around the four corners of the globe can strive to get Facebook credits by parting ways with their own respective currencies. Some of them include Brazilian Real, Euro, Indian Rupee, Japanese Yen, British Pound, Qatari Rials, Vietnamese Dong, Norwegian Krone, South African Rand, Hong Kong Dollar, UAE Dirham, Swedish Krona and Israeli Shekel. The company also throws a word of caution to the public at large. If your local currency is not accepted, the transactions can still be executed but they’ll have to be subjected to foreign exchange fees. 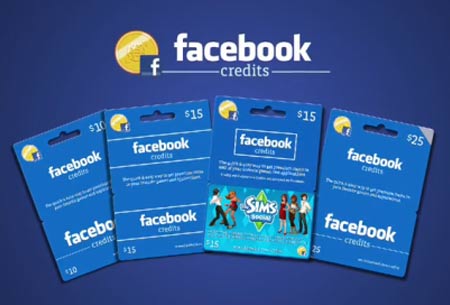 Another way to get Facebook credits besides buying them through the website itself is via gift cards. This option makes them great gift solutions for anyone who’s a Facebook enthusiast. However, this form of purchase is only extended to select regions and stores. In the US, you can get your hands on these gift cards at Target, Walmart, Best Buy, GameStop, Radioshack, 7-Eleven, Weis Market, Shop N Save, Shoppers, Giant Eagle, Ralphs, Acme, Safeway, Giant Carlisle and Toys R Us, among other places. 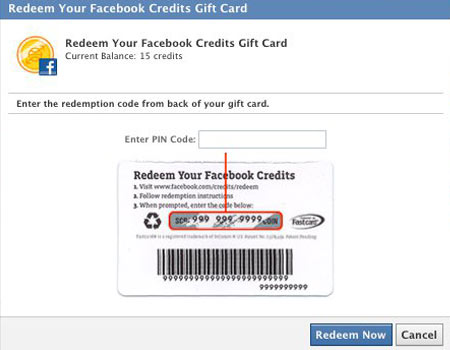 If you’re looking out for credits in Canada, you can pop into any Safeway, Walmart, Shoppers or Best Buy store and pick them up off the shelf. And if you reside in the UK, then your options include GAME/GameStation, Tesco and ASDA. To fully avail of your purchase, you’ll need to enter the redemption PIN code located at the back of the card into the pop up box that jumps onto the screen when you go directly to ‘http://www.facebook.com/credits/redeem.’ 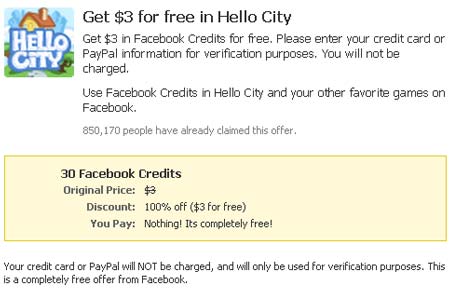 We all love free stuff, don’t we? And why should acquiring Facebook credits be any exception? There are a few ways to get them without having to empty out your wallet or purse. For one, the game Hello City offers you $3 absolutely free of cost when you down. This means, you’ll be richer by 30 credits that can be splurged on in-game items, either in this specific game or any other application present on the social networking site. There are also other games that offer you these freebies. Bubble Island and Treasure Madness let you earn 25 credits each, while Ninja Saga provides you with 15 credits.

Additionally, AppDog is another approach that can be used to get Facebook credits. If the developer of this gem is to be believed, tech enthusiasts will be endowed with free credits when they install iPhone, iPad, iPod touch and Android apps. This offer is extended to all paid as well as free apps. In keeping with the title name, you’ll get a certain number of ‘bones’ that can be redeemed for credits. 10 bones = 1 Facebook credit. So if you download Stitcher Radio on your Android device, you’ll get 6 bones and when iTriage is acquired directly on your Apple gadget, you’ll get 33 bones. 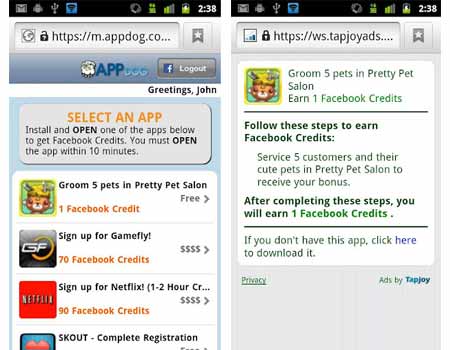 Facebook credits can be used to power up your play while enjoying various applications and games. As you’ve noticed, these goodies can be acquired either by paying a certain amount of real-world money or availing them absolutely free of cost. Do let us know whether our guide on how to get Facebook credits helped you in your social endeavors.