How To Find, Breed & Tame Parrots In Minecraft [Explained] 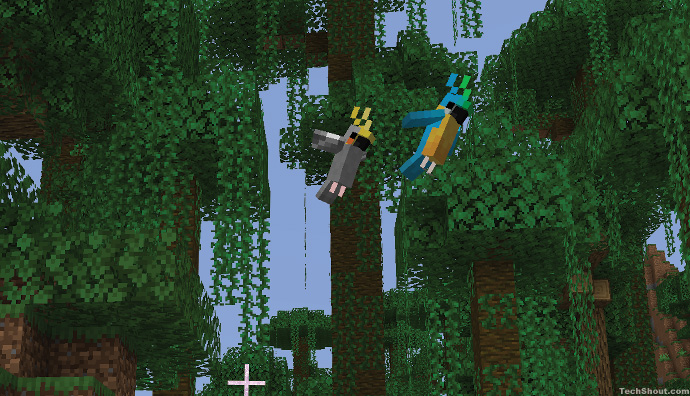 Minecraft parrots are a pretty rare mob — so if you’ve managed to find a pair of them in the wild, you’d want to know how to breed parrots in Minecraft. Here’s everything you need to know about that and more.

Parrots are passive mobs that have a total of 6 health points. They were introduced all the way back in version 1.12 and the official announcement about the mob came in March of 2017. There are five different colors of parrots available in Minecraft and all of them can be found in the wild.

They correspond to real-life parrot breeds. These passive bird mobs, just as they can do in the real world, can mimic noise. In the game, you will find them imitating sounds made by different neutral and hostile mobs up to 20 blocks away. Their imitations of hostile mobs can be used as an alert by players who are unaware of enemy activity around them. They can mimic sounds like the hiss of creepers, the groan of zombies and spider screeches.

Where To Find Parrots In Minecraft?

This might be the hardest part if you’re not considering using cheats or set seeds. Parrots are rare mobs that only spawn in the jungle biomes. Their spawn rate is an abysmal 0.2% and they generate in a biome which is rare in itself. 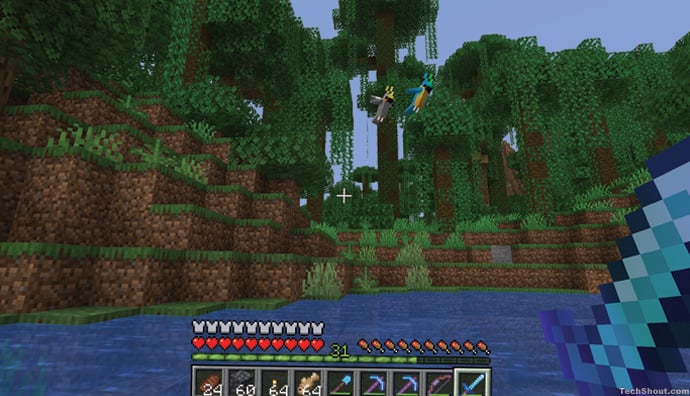 You’ll have to find a jungle biome on Chunk Base or by chance, and then hope that parrots happen to be there as well. They will almost always spawn on leaves, logs or grass situated at Y level 70 or above (though we did have luck while rowing around too). Make sure to turn on the co-ordinates if you’re having trouble finding them in the jungle. Blue parrots and Cyan parrots are the most sought after by players.

So, How Do You Tame Parrots?

Initially, you could use cookies to attract them towards you. However, there was backlash against Mojang due to inaccurate game design. In real life, chocolates are toxic to birds and can actually kill them.

After changing the game design, Mojang made it so that if the parrots eat cookies, they die since the cookies have chocolate chips in them. This is a pretty neat addition because Minecraft is a game largely played by a very impressionable demographic. 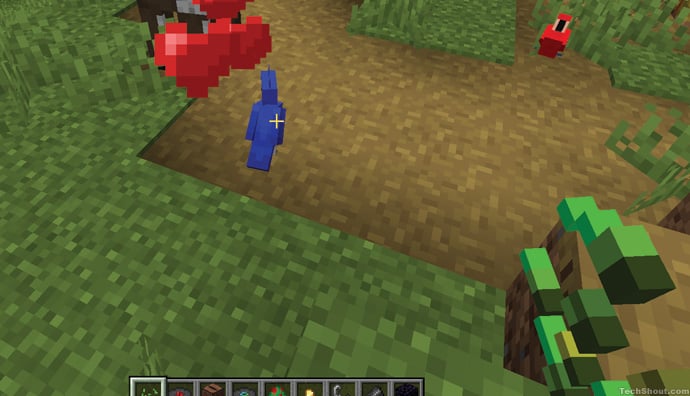 For taming parrots, you need any of the four different types of available seeds which are melon seeds, beetroot seeds, pumpkin seeds and wheat seeds. Melon seeds and wheat seeds are abundant in the game. Be sure to carry a lot of seeds for the taming process since there’s only 33% chance that one seed will do the job. Keep feeding seeds to the parrot you’re trying to turn into a pet until red hearts appear around it.

This signifies that the it has been tamed and is ready to be your new friend. You can even get it to sit on your shoulder if you walk past it. If you can’t get it to fly towards your shoulder, then try changing its stance. They tamed parrots can either sit (indicating that they’re stationary) or be in normal behavioral mode. You can change its position by right clicking on a tamed parrot in Minecraft.

Can You Breed Parrots?

Unfortunately, Minecraft hasn’t made the breeding function available yet for this mob. If you happen to find two parrots and feed them seeds like we’ve mentioned above, it will have no effect. This mob only has an adult form and no baby form as of yet.

It’s a bit of a shame since a baby parrot would be pretty cute to look at. Your only option in the vanilla version is to search for jungle biomes and seek out a parrot nesting in tree leaves or perching in low hanging branches. You can tame parrots in Minecraft and take them with you to your farmhouse, medieval castle or whatever other base you’ve built in the game.

BUT if you’re hellbent on having a baby bred and don’t mind using this add-on, you can install it and get two parrots to breed by feeding them beetroot seeds, melon seeds, pumpkin seeds or wheat seeds.

Where To Find Parrot Spawn Egg In Minecraft? 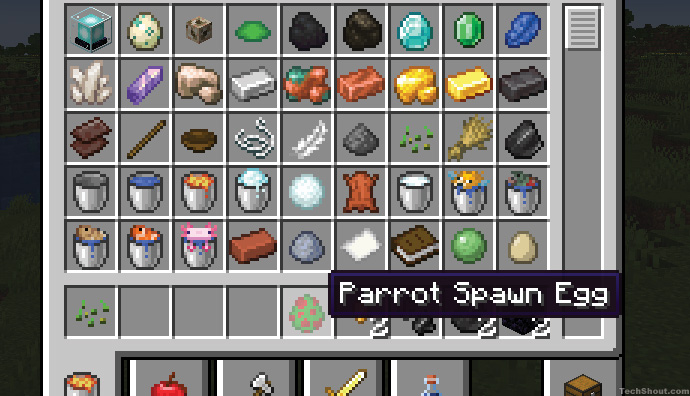 The only way to get a parrot egg in the game is to enter Creative mode (Survival mode does not offer this option). You can do this either by selecting Creative mode when generating a world or by going into LAN and typing “/gamemode creative” in the text box. Be sure to enable cheats in the LAN window before doing this. Go into the inventory tab and search for the parrot spawn egg under Miscellaneous. The egg is green in color with red spots scattered on it.

In case you don’t want to go through the trouble of searching for the passive mobs and if you do not want to create a new world just for the sake of baby parrots, then the LAN option would be your best bet. Once you’re done generating them for your world, you can turn off the LAN mode and subsequently the cheats as well and resume your normal offline play.

Read: How To Make Blast Furnace In Minecraft [And How To Use It]

Do not feed parrots cookies and try not to trap them in confined places. A lot of them die due to them getting stuck inside walls and floors. This known bug doesn’t happen often; but we’d keep them away from narrow spaces if we were you.

How To Make The Parrot Dance? 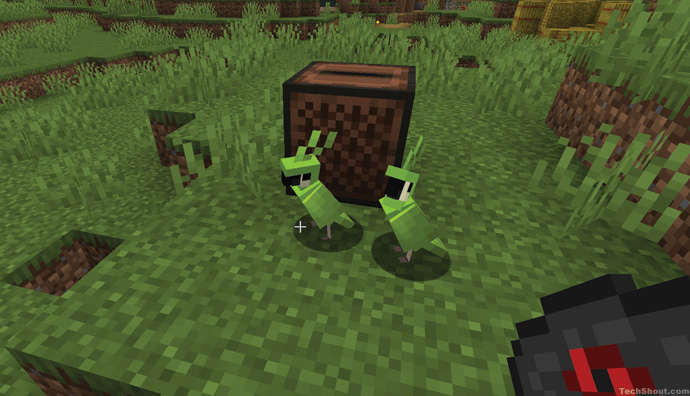 For this little trick, you need a jukebox. Once you get the jukebox, place it within 3 blocks of the parrots. Insert any CD and then they will start to dance. When the jukebox stops playing music, they’ll stop dancing and go back to their normal position.

How To Get The Parrot Off Your Shoulder?

When you’re fed up of having your parrot use your shoulder as a perch, there are multiple ways of shaking it off: 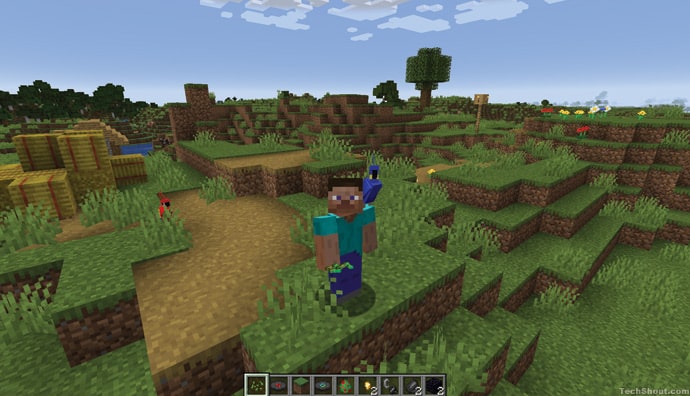 We wouldn’t advise this, but you can also force your parrot to dismount by starting to drown yourself or get your head submerged in lava. If you decide to try the latter, chances are that you and the parrot aren’t going to see the light of day again.

Minecraft is an ever-updating goldmine that churns out more and more content every year. It has many more big content patches on the way. On 7th June, 2022, The Wild Update (Minecraft 1.19) which is themed around wilderness and “scary things”, was released.

Ancient cities was the most-anticipated addition that arrived with it. Maybe in the future, we’ll see an update that brings enhancements to mob interactions and immersion. They might make parrots more useful besides serving as a sound alarm for nearby hostile mobs.