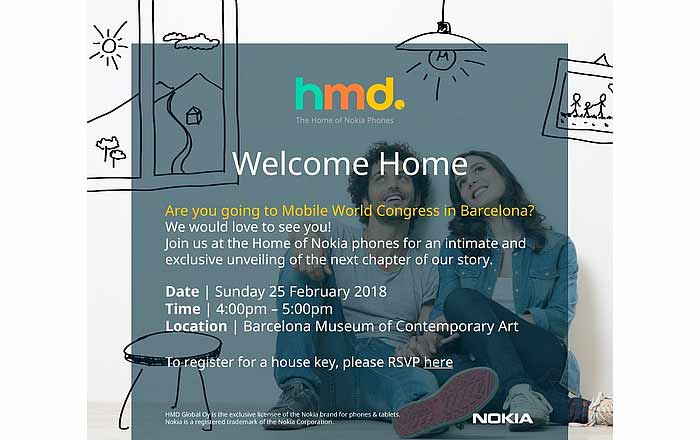 HMD Global has officially confirmed its presence at the MWC 2018 after a bit of teasing on social media about the next set of Nokia phones. The brand has begun issuing out invites to an event taking place on February 25, one day before the expo kicks off.

The invite is headlined by the words “Welcome Home,” while a couple in the background sits in a sketched house. There’s not much to go on here, but it seems likely the company will announce some kind of smart home device. Nokia has a big presence is that area already, so we’ll have to wait and see whether this pans out.

As for smartphones, one leading candidate is the global version of the Nokia 6 (2018). The handset came out in China a few weeks ago as the sequel to the original. The latter followed a similar pattern last year, making its debut in China before making a big splash at the MWC 2017.

The Nokia 6 (2018) might be accompanied by the 4G variant of the Nokia 3310. The feature phone was also a prominent player at last year’s event, so it makes sense for the sequel to show up as well this year. Other strong candidates include the long-fabled premium Nokia 9 and entry-level Nokia 1.

The Nokia 9 has long been rumored to be HMD Global’s flagship smartphone. An earlier rumor had claimed that the device would be unveiled alongside the Nokia 8 (2018) on January 19, but this clearly hasn’t come to pass. Both are due for a launch sometime soon and the MWC 2018 might just be the place to do it.

There’s also some talk of the China-only Nokia 7 breaking free and going international at the MWC 2018. This may well happen, especially since the Nokia 6 (2018) is doing the same. Stay tuned for the official lineup come February 25.