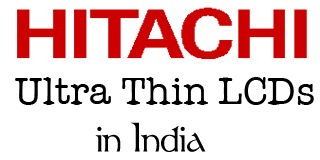 Hitachi has announced that it will launch the Ultra Thin Series of LCD televisions in India soon. The new series is claimed to be 70% thinner than regular LCD TVs available in the market currently. The Ultra Thin Series measures just 35mm thin, which breaks the world record for slimness when it comes to displays, according to Hitachi.

The newly launched range includes LCD TVs in sizes of 32-inch, 37-inch and 42-inch. The 32-inch model features a 360 degree aesthetic appeal and weighs around 10.9 kgs. Moreover it will be available in lack, red, white and blue color options.

“Focusing on slimness rather than largeness in terms of innovation in the LCD space offers many benefits to a customer. While few customers will be able to afford very large LCD screen sizes, the benefits of slim flat panel displays can be enjoyed by more. Moreover, with enhanced slimness come the possibilities of enhanced portability, less power consumption as well as sleeker looks,” said HHES Managing Director, Tadashi Nishiuchi.

The new series Ultra Thin Series will be available in the Indian market by early 2008.