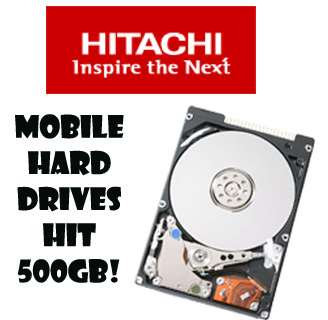 Hitachi has unveiled two new large-capacity hard drives for notebook computers- one that offers 400GB and another one that offers 500GB storage capacity in a 2.5-inch format.

These newly unveiled drives will enable notebook computers to be as powerful as desktop PCs. The 500GB model is perfect to store up to 500 hours of digital video, 178 standard-definition feature-length movies, 250 games or 125,000 four-minute songs.

Until now, the largest capacity laptop drive that was available in the market was a 320GB model manufactured by Western Digital.

According to Hitachi, its high-capacity 500GB drive will be available to manufactures of computers by February 2008.

As of now, Taiwan-based ASUStek Computer will be the first to make use of the newly announced Hitachi drives to create the world’s first laptop with a combined monster capacity of 1TB.

These ASUS M50 and M70 laptops with high capacity offerings will also be available in February and March 2008 respectively. However, the exact prices are not yet known.