Hindi Transliteration on Blogger and Hindi News announced by Google 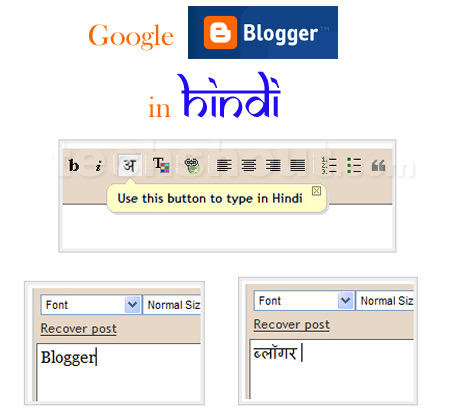 After launching a Hindi Google toolbar for Internet Explorer and releasing Google AdSense in Hindi, today, Google further strengthened its bond with Hindi, by introducing Hindi transliteration on Blogger – Google’s web publishing service, and Google News service in Hindi. With this move, Google feels that masses familiar with the Hindi language will be able to have quicker and easier access to more information thus enabling creation and consumption of Indian language content.

Google’s transliteration technology allows the conversion from English text to phonetically equivalent text in Indian languages. Hindi transliteration on Blogger makes it possible for users to publish content in Hindi while using English keyboards for text entry. For instance, users can write “Meri Dharti Hindustan” and this feature will convert it into the corresponding Hindi script. Keeping in mind that the audience is bilingual in many cases, Google allows the users to freely switch from English to Hindi and back.

The other launch – Google News in Hindi is based on Google’s ground-breaking clustering technology that gathers news stories from various Hindi news sources, and presents a ranked one page view with links to users’ favorite news sources in their favorite news sections. Though Google fully supports and induces the adoption of Unicode UTF-8 standard by all Indian language sites, this launch would enable users to reach content from even those news sources which are not yet in this format. As these news sites transition, Google will internally convert their content to the Unicode UTF-8 standard for the advantage of its users.

Speaking about this, Ram, Centre Head, Google India R&D said, “Google is committed to promoting the creation and consumption of content in Indian languages and we’re proud to launch our first Indian language edition for Google News and Blogger. These launches will enable our Hindi- speaking users to express themselves better and access information in a language they are comfortable with.” Adding, “Google search is already available in Indian languages such as Hindi, Bengali, Telugu, Tamil and Marathi. We had also recently launched the Google Toolbar search bar in Hindi. At Google we know that more information means more choice, more freedom and ultimately more power for people.”