Hey there! Facebook is buying WhatsApp, for a mind-numbing sum of $19 billion

It’d make one wonder what plans Facebook has with a free messaging service like WhatsApp that would force the social media giant to throw an astonishing sum of $19 billion so as to buy it. As perplexing as it may sound, this move has indeed move forward, and has granted Zuckerberg’s company access to a user base of 450 million people a month.

One has to admit Facebook Messenger isn’t doing quite well on its own as an instant messaging service, even after one of its features allowed integration with text messages. So what will change once the deal is complete, and WhatsApp becomes a Facebook entity? The former’s answer to this is a pure ‘nothing.’ 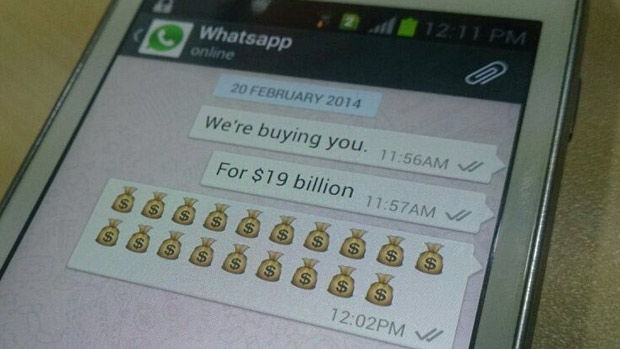 What will change?
Just like Instagram, the extremely popular service will stay autonomous and operate independently. Moreover, it will still continue to shy away from ads which is one of its main selling points. WhatsApp will remain free on all platforms it’s available on, and will ask for a nominal fee for one-year access after a particular period of time.

WhatsApp boasts of over 1 million new registered users per day apparently, and its messaging volume almost matches the entire global telecom SMS volume. And moreover, due to its presence on almost all major platforms and its excessive and growing use in emerging markets, Facebook will have tremendous reach to the people.

Conclusion
With Instagram, Facebook began to slowly integrate some of its features with the photo and video-sharing app until it reached a point from where virtually nothing could be amalgamated further. Let’s see how the social network’s pairing with WhatsApp goes.