We’ve already seen the leaked specifications of the Samsung Galaxy S5 Zoom and now, a purported image of the device has appeared online. The picture doesn’t have much to offer where clarity is concerned, but it does deliver a pretty good look at the device’s rear design where the large image sensor and flash are situated.

By the looks of the image provided by Kzoom, the Samsung Galaxy S5 Zoom doesn’t look to be much different than its predecessor. The company appears to have eliminated the bulge on the bottom which acts as a grip and the xenon flash is now slimmer. Where the other side of the device is concerned, we’re most likely going to be presented with a design quite similar to what the flagship Galaxy S5 rocks. 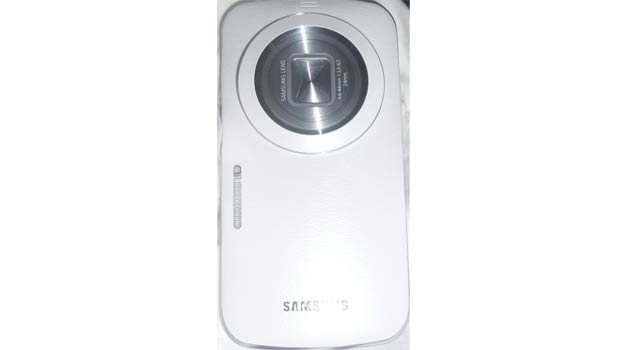 Where specifications are concerned, a lot of information is known thanks to a GFXBench listing. The Samsung Galaxy S5 Zoom will arrive with Android 4.4.2 KitKat out of the box and it will be powered by the same processor found in the Note 3 Neo, the Exynos 5 Hexa, which has quad A7 cores and dual A15 chips. Compared to the 4.3-inch S4 Zoom, the successor will have a 4.8-inch design and an HD display. The camera sensor has also been increased to 20.2MP from 16MP. Other features can be found below.

Key specs of the S5 Zoom:

Apart from the Samsung Galaxy S5 Zoom, the company is also working on other variants such as the S5 Active and mini.