Here’s what the 40K PlayStation 4 will fetch you

The cat’s out of the bag, now that the price as well as the release date of the PlayStation 4 in India has been revealed by Sony. The console’s supposed to be out in the country on January 6 with a price tag of Rs 39,990. And if you’re willing to cough up the high amount you might want to have a look at some of the features this next-gen consoles has in store. That’s why we’ve decided to give you a quick lowdown on its offerings.

Internal hardware
What we’re looking at here is a custom system architecture bearing a chip with eight x86-64 cores and an AMD next-generation Radeon-based 1.84 TFLOPS GPU. 8GB worth of RAM has been granted to the PlayStation 4 moreover, apart from a user upgradable 500GB hard drive.

External hardware
A Blu-Ray/DVD drive will be present on the system of course, precisely inscribed into its black colored body that’s fitted with a blue light slot. Two Super-Speed USB 3.0 ports and an AUX port will be incorporated by it, aside from Ethernet, Wi-Fi 802.11 b/g/n and Bluetooth 2.1+EDR connectivity modems and HDMI and optical output ports.

Controller and PS4 Eye camera
A DualShock 4 controller featuring Bluetooth 2.1+EDR support will be doled out along with the console. One of its highlights is the SHARE button which lets you instantly capture and publish gameplay videos on the web. Apart from an inbuilt speaker, this device also kicks in a stereo headset jack for convenient connection of your headphones. A color-changing light bar and a touch pad form its other important offerings. 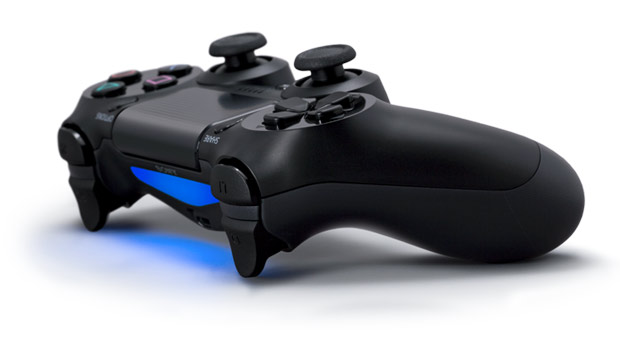 Next is the PlayStation 4 camera which goes by the motto of ‘see, hear, cheer and share.’ This optional motion sensing accessory will be sold separately, and will support identifying entire body movements of users as well as facial recognition. The presence of four microphones enables it to take voice commands for performing certain actions like switching on, starting games and much more. At launch however, many of the voice commands won’t be available, as they’ll be added later through a software update.

Features
Once you’ve powered up the console, a range of fresh features will greet you. We’re going to highlight some of the noteworthy ones here. The PS4 allows you to perform automatic background updates while it’s in sleep mode as well as when you’re playing your games. Moreover, if you’re downloading a game through the PS Store, you’ll be able to play it as it downloads on your system, not having to wait until the whole process is complete.

Furthermore, the interface of the PlayStation 4 has been designed to tailor itself based on your preferences. Social integration forms a large part of the whole experience of the console, especially its ability to allow live streaming on services like Twitch and Ustream. 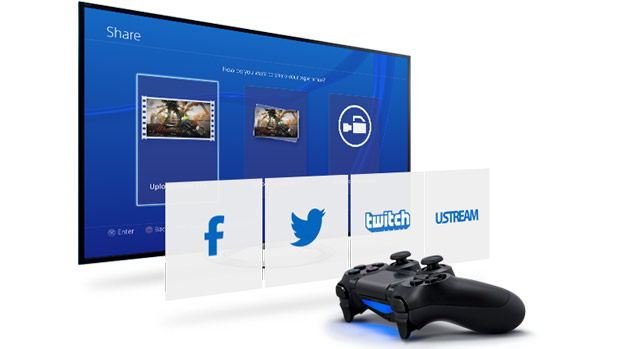 PS Vita, smartphone and tablets
The Remote Play function introduced last year by Sony through its PS3 has made its way to the PS4 as well. This makes it possible for you to take your games anywhere within your house, even if your TV is switched off. On a common network connection the console can directly stream its games onto the screen of the Vita, letting you use it as a second display or as the gaming device itself.

And then there’s the PlayStation App which allows smartphone and tablet users to interact with their consoles like never before. With it you can watch the activity of your PSN friends, chat with them and even browse through the PS Store to have the console download your content as soon as you hit Purchase. Second screen experiences are also made possible by this app.

Backwards compatibility
No, your PS3 discs won’t be able to work on the PS4 due to its lack of backwards compatibility. But Sony has disclosed that you will definitely be able to play those games in the future though cloud streaming a la OnLive. This feature is still to be made available however, and last we heard it’ll be out sometime in early 2014.

PS Plus
Unlike the PS3, the PlayStation 4 will require a PS Plus membership in order to indulge in online multiplayer gameplay. But a single subscription will be enough for you to grab the benefits of the service on your PS3, PS4 as well as your PS Vita. Besides, discounts and free games which the service is known for will be doled out from time to time.

Games
The most important part of a console at the end of the day has to its games line-up. The massive list of titles that are either out now or a gearing up for a release has been put up by Sony on its official site. View it here.

Pre-order
Like we said, the PlayStation 4 will cost around Rs 40,000 upon its release in India on January 6, 2014. You can pre-order it right now through Snapdeal.