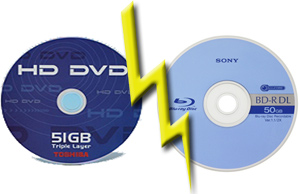 In an advancement in the format wars that concern the next-generation formats- HD-DVD and Blu-Ray, it appears that HD-DVD has the upper-hand over rival Blu-ray format, at least in Europe, that is.

According to a report in the Financial Times, in Europe film makers are favoring the HD-DVD format. HD-DVD is the next-generation DVD standard pioneered by Toshiba, while rival Blu-ray is Sony’s next-generation baby.

However, in America, where Blue-ray discs are outselling HD-DVDs by two to one, this European trend toward adopting HD-DVD formats, has not yet caught on. Clearly, in the USA, Blu-ray seems to be the choice.

It is also believed among European film companies that process for HD-DVD players will fall faster than those of Blu-ray. This belief is based on the expectation that once Chinese manufacturers begin to produce HD-DVD players, prices reductions of the Toshiba-pioneered DVD format player will soon follow.

The Financial Times also emphasized on the fact that production costs of these players are a key issue for film makers. DVD production lines can be easily upgraded to make HD-DVD discs. However, Blu-ray requires completely new equipment.

Even though the Blu-ray disc has a much higher capacity than that of HD-DVDs, this fact has not appeared to change the minds of most European film makers.