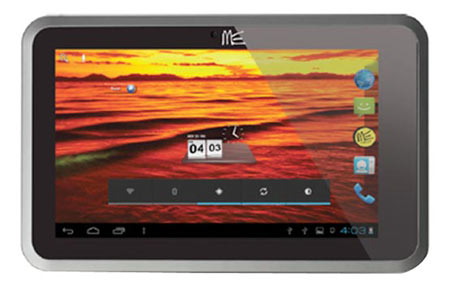 The price for the HCL Me Y3 has been revealed and the tablet is available in India via online retail. The device comes with Wi-Fi hotspot functionality and calling capability, to which effect it offers support for two SIM cards simultaneously. The company has been a busy boy of late and we just recently saw it release the tall V1 slab, in the same category.

The Me Y3 has a 7-inch capacitive touch screen display and is capable of putting out images and video at a resolution of 1024 x 600 pixels. It takes advantage of the Android Ice Cream Sandwich platform to deliver a user experience a level above Gingerbread.

The calling tab comes with 1GB of DDR3 RAM and about 4GB of internal memory, which the company says can be expanded all the way up to 32GB via a microSD card slot. In terms of processing power, it features a Cortex A9 chip which is made to run at 1GHz. 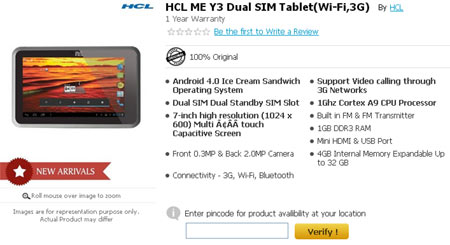 Coming to multimedia capabilities, the device has a 2MP camera on the back panel and a 0.3MP webcam on the front. And because it is 3G capable with dual SIM support, users will be able to make video calls on the slate. Other connectivity options include Bluetooth and Wi-Fi.

Finally, it is endowed with a 3100mAh battery, although no specifics have been provided on how this unit stands up to usage. Furthermore, it measures 225 x 150 x 90 millimeters in dimensions and even has a mini HDMI port and a USB port, plus a 3.5mm audio jack.

The HCL Me Y3 is available in India via Snapdeal for a cost of Rs. 11,999 and should be delivered in about 5 business days once ordered. Those interested can also purchase the slab in installments over a period of either 3 or 6 months.