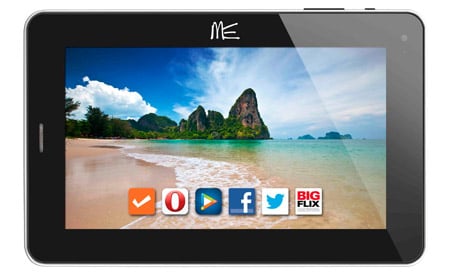 With the HCL Me Connect 2G 2.0, the lineup of voice calling tablets in India gets bigger and here we’re talking about a budget device with Rs 8,499 attached to it. Staying true to its wallet-friendly tag, HCL’s Android slab features mid-range specs and also offers support for local languages.

The HCL Me Connect 2G 2.0 can deal with 11 major languages spoken in the country. They cover Hindi, Marathi, Kannada, Bengali, Telugu and Tamil amongst others. The device sports a 480 x 800p multi-touch display of 7 inches and of the capacitive type. Working with Android Jelly Bean, it is helped along by 1GB of DDR3 RAM and an ARM Cortex A9 CPU clocked at 1GHz.

Voice calling is an aspect that a lot of manufacturers, including Samsung, have been concentrating on while introducing slates of varying ranges in this market. Well, the HCL Me Connect 2G 2.0 does come with a SIM card slot with support for 2G. Unfortunately, the only way users will be able to access 3G data connectivity will be through a USB dongle surfing on WCDMA/EVDO.

There’s a 2MP camera on the back panel of the HCL Me Connect 2G 2.0 and a 0.3MP one on the front. The internal storage space is a measly 4GB; but users who want more hoarding room can always choose to slide in a microSD card of 32GB or less. Though the company mentions a ‘long lasting’ 3800mAh battery embedded within it, there’s no word on exactly how much play time can be expected from it. Lastly, a miniHDMI port enables hooking it up to a larger display.

The Me Connect 2G 2.0 is out at the said price through various retail outlets and online vendors. The manufacturer says that it arrives pre-loaded with ‘1 Mobile Store’ for access to more than 3,00,000 downloadable applications. There’s also a company-branded Touch after sales service app for 24×7 customer care support.