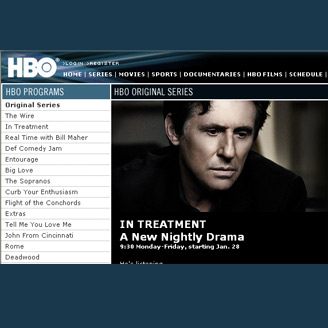 US TV Channel HBO is now testing a new download service called HBO Broadband which will enable subscribers to download movies and TV shows over the Internet on to their computers.

HBO on Broadband will debut with a much larger library than its cable-based on-demand Pay TV service. It is also known that it is developed a free service.

The HBO on Broadband service is expected to offer around 600 titles on a monthly basis, with around 400 of these being available at anytime. There will also be a live stream of the main HBO channel that we watch on television.

Episodes of popular TV series like The Sopranos, Flight of the Concords and Real Time wit Bill Maher among a host others will also be available for download.

The US pay TV channel HBO is a subsidiary of Times Warner. Initially, the HBO on Broadband service will be rolled out only to Time Warner Cable’s high-speed Internet subscribers in Green Bay and Milwaukee, Wisconsin, as a free add-on to HBO and HBO on Demand.

According to company spokesman Jeff Cusson, at present there is no timeline as such for making the service available to all US subscribers.

The HBO on Broadband service will at first be compatible with Windows PCs. An Apple version is supposed to be currently in development.