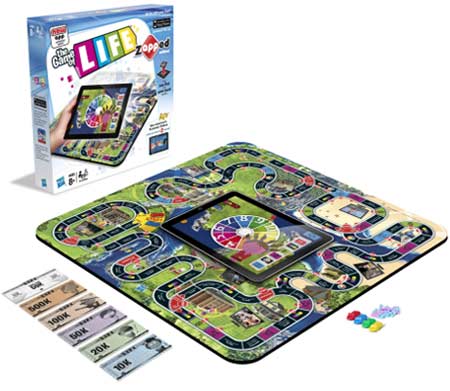 While most aspects of gaming are taking the digital route, the Hasbro zAPPed titles have decided to take popular board games into the virtual zone. Along with zAPPEd boards for games like The Game Of Life, Monopoly and Battleship, the company will be introducing iOS apps for each of these offerings.

The Game Of Life zAPPed which has already been released, can be played with the assistance of its corresponding app. This application brings more than 100 funny clips from America’s Funniest Videos to the iPad. Once the app is downloaded, users can place the Apple slate on the game board to take advantage of the new tech aspect. The software also features the virtual spinner.

“Knowing that families are more attached than ever to their mobile devices, we wanted to revolutionize face-to-face gaming with our world famous brands and our proprietary technology to create a unique gaming experience,” stated Eric Nyman, Global Brand Leader for Hasbro Gaming.

The Monopoly version of the zAPPed game can be played using Apple devices including the iPhone, iPod touch and iPad. Not only will players get virtual bank accounts, but also digital versions of Chance and Community Chest cards. The Hasbro offering will be made available in June this year. Lastly, the Battleship zAPPed game that will be released in September, can be played by placing the ships directly onto the iPad itself.

The Hasbro zAPPed Game Of Life is now available for a price of $24.99 via the Amazon and Toys R Us websites. The game is already available at the Toys R Us Times Square, while its retail store will stock up on February 17. The Game Of Life zAPPed app can be downloaded for free from the Apple App Store.