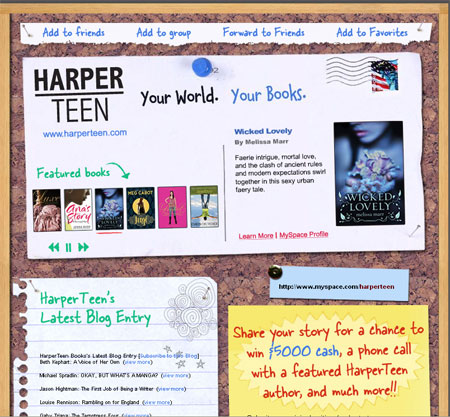 HarperTeen has joined hands with MySpace to introduce MySpace/HyperTeen (www.myspace.com/harperteen), a customized interactive community for teen reaser where they get an opportunity to connect with each other, read author blogs, interact on message boards and forums, learn about forthcoming releases, post photos, and take part in HarperTeen contests, programs and online polls. From January 2008 onwards, HarperTeens will interact with readers through the HarperTeen/MySpace site through author chats, in a regular basis.

In addition, through January 7th, 2008, MySpace/HarperTeen profile also offers user generated content tools where MySpace users can “Create and Share” by putting in their creative writing in the form of short stories, poems, and songs, and receive feedback from their peers in the HarperTeen community in the first “Create and Share” writing contest. Though the HarperTeen judges will zero upon the ten most original and creative entries, it is finally the MySpace/HarperTeen community who will vote for the actual winner. A huge prize of $5,000 will be awarded to the lucky winner and all the finalists along with their work will be featured on the HarperTeen profile and various other MySpace pages.

Diane Naughton, Vice President of Marketing at HarperCollins Children’s Books said, “With millions of teens spending their time online everyday, it makes perfect sense for us to partner with MySpace to build the HarperTeen community.” Adding, “Our custom community offers readers the latest updates on HarperTeen books and a place to interact with authors and peers — all within the MySpace world.”

Further more, the MySpace/HarperTeen profile will also keep readers well-versed with new launches through their “Weekend Read” bulletin. Every Friday, users receive a book recommendation, and that particular book can be discussed the following week on the message boards.

The HarperTeen and MySpace team-up calls for the two to update the HarperTeen/MySpace profile with the latest contests, video trailers, polls, quizzes and information about new releases, regularly. MySpace will also promote the HarperTeen profile all through their site.