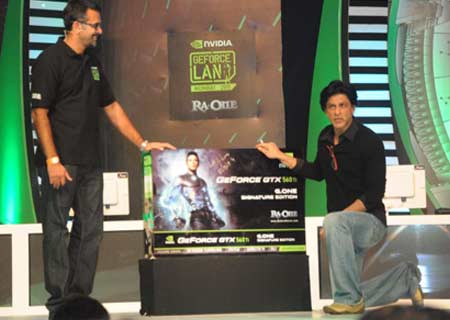 These graphics cards will be available in two different designs. They not only claim to augment the concerned system’s gaming graphics-handling abilities, but also its multimedia capabilities and the kind of web browsing experience users can expect. As for the GeForce LAN event, it’s the first time that Nvidia’s bringing the tournament to India and an eye on the emerging gaming hardware market is undoubtedly on the company’s agenda.

“Both Nvidia and Shahrukh Khan’s passion for gaming has been brought together at this massive gaming tournament. And the GeForce G.One Signature Edition graphics card are testimony to that,” remarked Vishal Dhupar, Managing Director, Asia – South, Nvidia. “Nvidia has always been at the forefront of visual technology. We are proud to partner with Ra.One to bring avid gamers an experience they will cherish!”

The GeForce LAN event in question attracted over a 1,000 gamers to participate in the tournament. 6 gamers won the title of ‘Ultimate Gamer’ from amongst the 600 players and they were felicitated by actor ShahRukh Khan. Also, Ra.One: The Game based on movie happens to be available for PS2 and PS3 systems through PSN.

Pricing and availability details of the Nvidia GeForce G.One Signature Edition graphics card have not been mentioned clearly for the present.