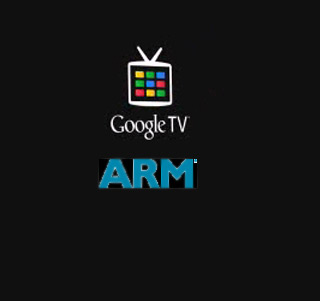 Though just half way down, the month is already appearing to be a good one for ARM. The company’s just fresh off Microsoft’s confirmation of having their flagship Windows OS being ARM-based in future versions. Keeping the buzz alive, ARM has got rumor mills churning again. Word is that an ARM-enabled Google TV platform is well in the offing. At least that’s what ARMdevices.net ‘has on very high authority from someone at Google’.

Those who’ve been religiously following Google’s doings on its Google TV bit will remember that despite the much hyped introduction, the service never really managed to pick pace. Though Intel’s CE4100 media chipsets were employed to have the Google TV set-tops up and running last year, hearsay of Google introducing ARM-friendly Google TV boxes seemed to have always been around.

There are a host of features highly anticipated with future Google TV devices. So will shifting from Intel to ARM permit fragmentation, buttress versions that don’t have complete HDMI-passthrough/IR-blaster overalay attributes or even support [email protected]? Well, all that and more still need affirmation, though we’re hoping the functions to feature in future devices. Cost is however what most consumers have their eyes set on if ARM-based Google TV devices do come around, considering the current $299 price of the Logitech Revue.

In all likelihood there could be Google TV boxes that are already based on ARM chips and the search giant is probably looking at the right time to make it all official. Among the many reasons stopping Google from coming forth, chances are an impact on the sales of the already available Logitech Revue tops the list.