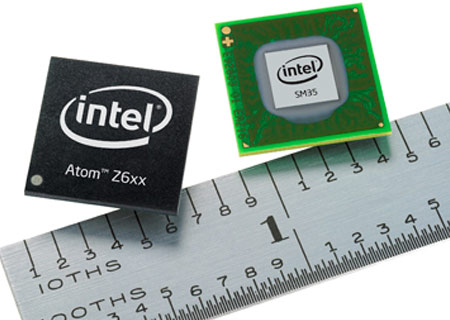 Intel seems to have grown into a big enough chipset giant to actually start moving the Atom products faster than its co-founder’s law dictates. We’ll start seeing devices uplifted onto the Intel Atom or Oak Trail platform starting from next month. These will include offerings from Lenovo, Motion Computing, Razer and Fujitsu among others. Also on the cards is the next-generation 32nm Intel Atom update presently going by the codename ‘Cedar Trail’.

The Intel Atom processor Z670, part of the Oak Trail platform, is built to render enhanced video playback, quicker web browsing and extended battery life. It supports Adobe Flash, 1080p video decoding and HDMI. The processor can work with gadgets running Android, Windows and MeeGo. It arrives with the Intel SM35 Express Chipset and sports a 60% smaller spatial footprint as compared to previous generations. Intel Enhanced Deeper Sleep which helps the system save on power during periods of system inactivity and Intel SpeedStep are part of the other key features.

“The new Intel Atom ‘Oak Trail’ platform, with ‘Cedar Trail’ to follow, are examples of our continued commitment to bring amazing personal and mobile experiences to netbook and tablet devices, delivering architectural enhancements for longer battery life and greater performance,” explained Doug Davis, vice president and general manager of the Netbook and Tablet Group at Intel. “We are accelerating the Intel Atom product line to now move faster than Moore’s law, bringing new products to market on three process technologies in the next 3 years.”

Sample units of Cedar Trail are making their way to OEMs and ODMs at present. As for regular consumers, mobile and desktop products based on this chip will be out sometime this quarter.