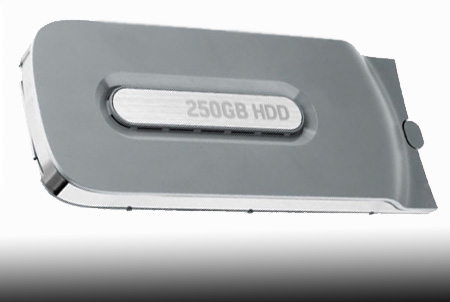 A few days back, there was a rumor doing its rounds about whether the Xbox 360 system would get USB storage connectivity. Although there was no confirmation from the company’s side, Microsoft has however disclosed that players can now store all their content and more with a new introduction. Gamers can do so by employing the new 250GB hard drive with the Xbox 360 console.

Through the Xbox 360 250GB hard drive, players can easily download and store a plethora of Xbox Live Arcade games, latest demos and complete game titles with Games on Demand as well as movies and TV shows. This spicy offerings for players can be directly stored onto the Xbox 360 console.

They can take complete advantage of all the content strewn around Xbox Live. This terrain is packed with loads of games and other forms of entertainment as well. As the company suggest, there are over 13,000 pieces of gaming content. Besides providing different game titles, players can also espy over 25,000 movies, music videos and TV episodes. All this can be seamlessly downloaded or streamed to the Xbox 360.

With the inclusion of the large storage solution, gamers can now download and save a variety of Avatar clothes and props. They are provided with famous clothing brands like Adidas, Quiksilver, tokidoki, Roxy and games such as Gears of War and Halo. Besides looking their best, Avatars can also keep their very own pet.