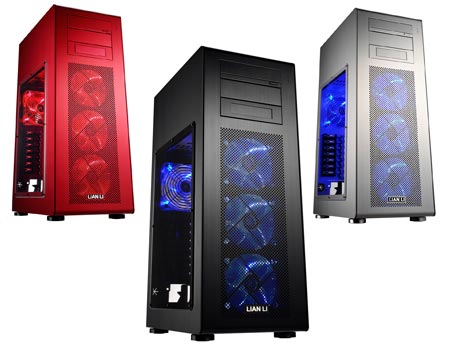 Those looking out for a mid-tower or gaming chassis that boasts of a tool-less design can glance this way. Lian Li has introduced the new TYR series PC-X900 mid-tower chassis that sports a hair-line brushed anodized aluminum exterior and multi-heat zone design. The manufacturers call it an alternate choice between the previously released smaller PC-X500 and full-size PC-X2000.

The chassis lends support to ATX/M-ATX mainboards and includes seven standard 3.5” HDDs in a pair of tool-less HDD cases. The case is separated into two heat zones and the PSU case is fitted into the bottom. Three 120mm LED fans at the front and two 120mm LED fans at the rear aid heat dissipation. Additionally, the enclosure also comprises of three standard 5.25” optical drives and has room for a 180mm long power supply at the rear.

Lian Li’s newest offering incorporates four USB 3.0 multimedia I/O ports, a standard eSATA HD audio port and seven PCI expansion slots. Video cards measuring a maximum of 300mm in length can be fitted into the device and the motherboard is placed at the middle-level. The side panel of the enclosure is transparent and can be opened with a tool-less latch, with users being able to open the motherboard tray too.

The CPU coolers are removable and the PCI add-on cards may be assembled easily. Its multimedia ports can be found on the top of the case and owners need only slide a drive into the bay and close the mounting bar to secure it. Apart from the two fans, vents on the PCI slots aid in cooling. Users can tweak the balance between silent operation and cooling with a fan controller in the back of the device.

Measuring 230mm x 598mm x 388mm, the silver or black colored PC-X900 will be out for around $439, while the red shaded PC-X900 will be tagged at approximately $499. Lian Li will launch this offering towards the end of the current month.