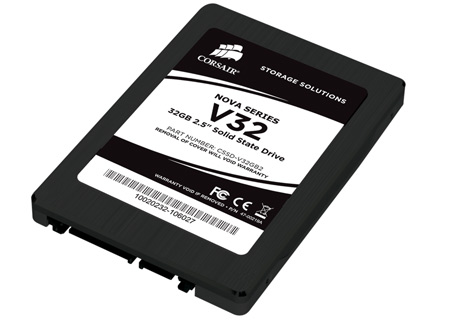 When we last heard from Corsair, the company had introduced the new Flash Survivor GTR flash drive in 32GB and 64GB capacities. The company recently also unveiled two new drives for its Nova series of SSD drives. The new additions are offered in 32GB and 256GB densities.

The latest 32GB drive claims to combine performance and value. Capable of being employed as a boot drive for basic configuration, the SSD can also be used in high-performance multi-drive RAID configurations. As for the 256GB drive, it should cater to systems in need of both high performance and capacity. The drives are known to use the Indilinx Barefoot controller.

The 32GB SSD can attain read and write speeds of up to 195MB/s and 75MB/s respectively while the 256GB model reaches 250MB/s and 195MB/s speeds for read and write correspondingly. Buttressing the TRIM command offered by the Microsoft Windows 7 platform, the drives also have the ability to deliver optimal performance automatically through their lifetime.

Users can grab the 32GB and 256GB Nova Series SSDs will be made available immediately through Corsair’s authorized distributors and resellers across the world. Backed by a two-year limited warranty, they come with complete customer support. There’s no mention of the price of these drives though.