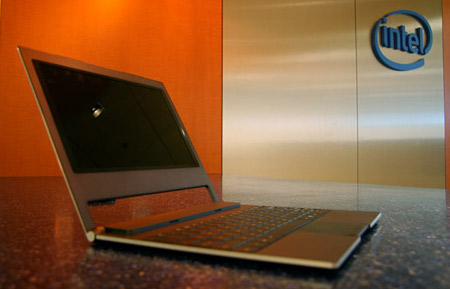 Intel does know how to pull off a good show at any major event, just take a look into the company’s presence at the Computex 2010. An extremely slim netbook dubbed Canoe Lake, the future SoC Atom-based ‘Tunnel Creek’ and new additions to the Atom processor family were revealed by Intel at the IT event.

The newly unveiled Canoe Lake boasts of a 14mm slim profile which is touted to be significantly thinner than netbooks currently available in the market. It comes powered by Intel’s very own upcoming mobile dual-core Pine Trail processor. The company also demonstrated cross-devices experiences based on the MeeGO, Windows and Google OS at the event.

The company’s Core processors that implement Intel microarchitecture codenamed ‘Sandy Bridge’ are expected to be mass produced in the latter half of this year. The Oak Trail processor which is anticipated to be launched in 2011 is crafted for small form factor tablets and netbooks. It is cited to offer around 50% reduction in energy consumption and full HD playback.

“Acer will be ready with MeeGo-based mobile devices,” remarked Acer’s CEO Gianfranco Lanci. “MeeGo’s open software platform will present our customers with another choice of a friendly, easy-to-use operating system. We are pleased to collaborate with Intel in our continuous drive to provide effortless technologies that empower people at work, home – anytime, anywhere.”

Intel’s processor and MeeGo software deal with Chinese car manufacturer HawTai Automobile will open the portals to an in-vehicle-infotainmnet platform courtesy of Intel processors. The mobile dual-core Intel Atom processors N455 and N475 with DDR3 support for netbooks are currently available in the market, while the D525 and D425 for entry-level desktop PCs are slated for launch on June 21 this month.