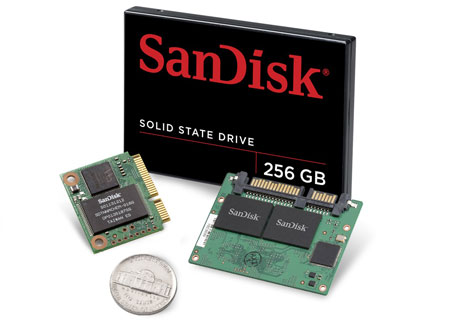 SanDisk Corporation brings new solid state drive products onto the tech scene. The company unveils the SanDisk SSD G4 and SSD P4 drives which are set to meet the needs of users who own various devices. The former offering is looked upon as a substitute for HDDs embedded in notebooks while the latter is recognized as a successor to the pSSD modular drive. With this inclusion, creators can fashion even slimmer netbook and tablet computers.

The latest drives from SanDisk bring to the forefront high-capacity storage, reliable performance according to the company. Users can expect the offering to provide up to 128GB and 256GB of storage respectively while also sporting different compact form factors that are further customizable as per the manufacturers’ desire. The new SSDs employ SanDisk’s advanced 32-nanometer multi-level cell process technology. This enables high-capacity storage with a tiny footprint.

SanDisk SSD G4 includes a capacity that ranges from 64GB to 256GB with read/write speeds of up to 220 and 160MB/sec. The drives offer users better boot times, superior system responsiveness as well as loads of space to hold data and content such as music, photos, games and videos. It also provides Long-term Data Endurance of 160 terabytes written for a 256GB drive as well as a page-based algorithm called ExtremeFFS.

The other SanDisk offering namely SSD P4 comes complete with capacities that range from 8GB to 128GB which is ideal for OEMs to endow small devices with big storage solutions. It can be acquired in different forms such as a new variant of the mSATA module called mSATA mini which measures just 26.80 x 30.00 x 3.4 mm.

The SSD P4 also utilizes nCache acceleration technology which shortens boot times as well as aids in increasing system responsiveness. This particular SSD can be employed within small devices like netbooks, tablet computers and slim notebooks as well as Set Top Boxes, printers and POS terminals among others.

The SanDisk SSD G4 and SanDisk SSD P4 are scheduled to hit stores by Q3 2010. The exact pricing details of the drives are however still unclear.