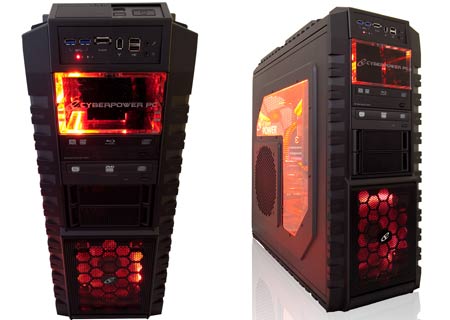 Back in April, CyberPower revealed a series of gaming systems that feature AMD’s Phenom II X6 and 890 chipset. Now the company unfurls onto its Gamer Xtreme series of desktop PCs the new Intel ‘K’ series processors. The latest product comprises of an unlocked CPU multiplier as well as Intel’s advanced Turbo Boost technology.

CyberPower reveals that powerful processing and graphics are achieved with the employment of the new reliable processors with any Nvidia GTX Series and/or ATI 5800 Series video cards. The unlocked Gamer Xtreme series can also factory overclocked by CyberPower in order to comply with the user’s desires.

Eric Thompson, Director of NA Channels, Intel Corporation explained, “We are excited that Cyberpower will feature the new Intel Core i7-875K and Intel Core i5-655 processors in its Gamer Xtreme series of desktop PCs. These new processors offer many advanced features to help PC enthusiasts get the most out of their overclocking experience.”

Players also have the ability to personalize unlocked gaming system by utilizing CyberPower’s Advanced Hydro LiquidCooling with additional number of SSD, extreme performance memory and many other peripheral components options. Players will be able to enjoy a better multimedia and gaming experience as all its reliable systems come complete with Microsoft Windows 7 64-bit Operating System.

CyberPower systems fitted with the new CPUs can be acquired at a starting price of $699. The company also offers a 3-year limited warranty and free lifetime phone support for all its computer systems.