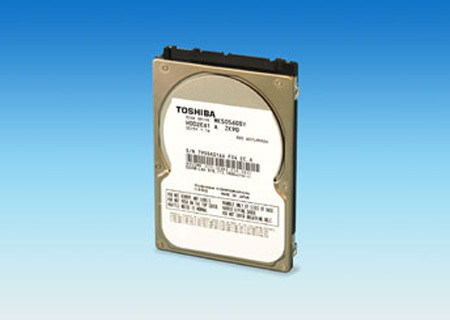 Hard disk drives are the brain of a PC and prove to be the most essential part for a system to work well. Toshiba has announced a new family of high-performance 7.200RPM 2.5HDDs that include top-end drives with half-terabyte of capacity.

This all new high-performance MK5056GSY series comes in capacities of 160GB, 250GB, 320GB and 500GB. This series has been conceived for commercial and consumer notebook PCs, along with gaming notebooks and all-in-one desktops. This set of drives claim to supply significant performance improvements over Toshiba’s earlier generation 7,200RPM drives.

These HDDs transfer at 1,255Mb/s offering 23 percent boost. The energy consumption efficiency has also been raised by 28 percent. This set of drives does not believe in making noise as the double-platter MK5056GSY a half terabyte model and the MK3256GSY reduce acoustic noise to 25dB which results in a 3dB decrease from the prior MK3254GSY drive.

The single platter MK2556GSY and MK1656GSY models on the other hand cut down acoustic noise to 23dB that results in a 2dB decrease when compared to the MK1654GSY. Hence, the MK5056GSY family proves to be the quietest 7,200RPM 2.5-inch HDDs. This set of drives is also compliant with the European Union’s RoHS directive and are halogen-free, making them eco-friendly. The pricing and availability of this set of drives has not been disclosed as of now.