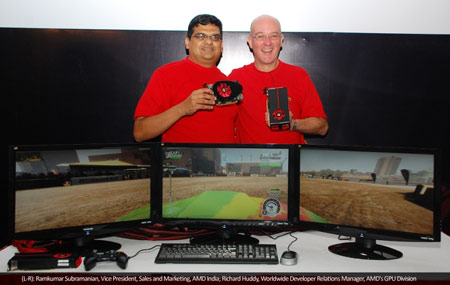 The series’ ATI stream technology is engineered to take full advantage of the new Windows OS and DirectX 11 to give users an enhanced computing experience. The HD 5800 is capable of rendering up to 2.72 Teraflops of power and is backwards compatible with DirectX 9, 10, and 10.1 versions.

“Games aren’t the only applications for graphics anymore. Many applications are already designed to take advantage of the massive parallel processing capabilities of the GPU. To help this phenomenon, ATI Radeon HD 5800 series of graphics cards, driven by the most powerful processor on the planet, is changing the game, both for the ‘gamer’ and the ‘worker’ in us,” declaimed Anirban Chakravartti, Director, Global Business Development, Professional Graphics, AMD.

The HD 5850 and HD 5870 cards boast of 1GB GDDR5 memory. The entire series incorporates ATI Eyefinity and CrossFireX technology. With Eyefinity, players have the option of viewing the game from up to three angles in resolutions of 12 x full HD. What’s more, the upcoming 5870 cards are set to integrate Eyefinity6 technology that will allow up to six game viewing angles.

The foundation of DirectX 11 API lies in AMD graphics hardware. The monthly ATI Catalyst driver and development of games based on DirectX 11 shows potential for stable and dependable game performances. The cards also provide support to AMD tessellation technology and OpenCL. DiRT 2, Alien vs. Predator, The Lord of the Rings Online, Eberron Unlimited and Dungeons and Dragons Online are some of the games set to release that display the full potential of AMD’s latest graphics cards.

AMD has not yet mentioned the price of any of the cards.