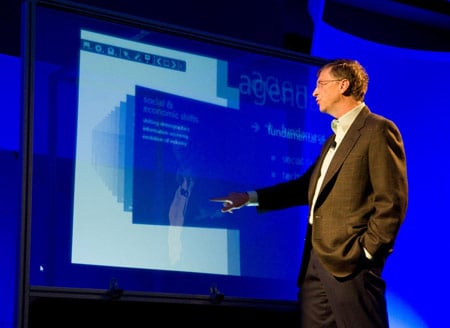 Microsoft Chairman, Bill Gates showcased the TouchWall, a touchscreen based display, at the CEO Summit 2008. In simple words we can say that the TouchWall is a vertical and wall-mountable version of the Surface.

The TouchWall is developed by Microsoft’s Research and Office Labs department.

Microsoft also demonstrated the Plex software that is embedded in the TouchWall. The device’s laser and infrared technology along with the Plex technology help in generating the touch input.

“Whenever I go up and touch it, the software will notice it,” said Bill Gates.

The TouchWall display showcased by Gates is as big as 4×6 feet. The TouchWall is said to be ideal for board meetings or other places where interactive presentations are given frequently.

Bill Gates further added that the touchsreen interface coffee table, Surface is as costly as $10,000. However Microsoft has been aiming at reducing the cost of such products for making them available for the middle-class income man.

Let’s actually hope that devices like the Surface and TouchWall will be affordable to the common man soon.

Samsung Rolls Out Refreshed Lineup Of High-Resolution Monitors For 2021