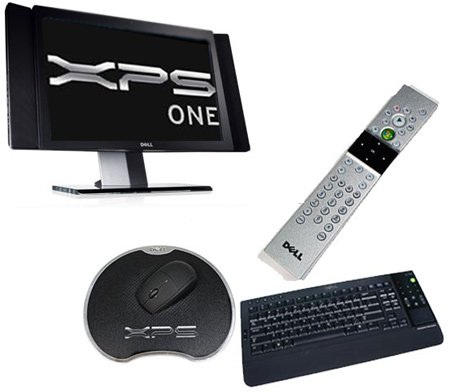 Dell has gone ahead and launched its all-in-one Dell XPS One, which is a sleek desktop PC that combines a monitor and CPU in a single bundle. This product which is along the same lines as Apple’s iMac PCs and Gateway’s One PC, is all set to compete against the two companies.

The Dell All-in-One PC has a 20-inch display, Intel Core 2 Duo processors, hard drives starting at capacities of 250GB and 2GB of memory. It comes bundled with Windows Vista Home Premium, a TV tuner and a remote control.

The Dell XPS One PC comes in four designs whose names are pretty self-explanatory. They are the Essential One, the Music One, the Performance One and the Entertainment One.

The Dell Essential One is a high-end PC which offers the convenience of one cord. The Music One comes bundled with wireless headphones. The Performance One obviously offers the best in performance with its high-speed processor and bundled Microsoft Office software, while the Entertainment One is a home media centre that features a Blu-ray Disc burner and an ATI HD 2400 Pro graphics card.

The All-in-One Dell XPS One desktops also come integrated with a video card and an 8-in-1 media reader.

Listed below is the price list for the Dell XPS One PC:

Dell’s XPS One computers are immediately available via Dell’s Web site. Otherwise, you will have to wait until November27, 2007 to actually buy this PC from retail stores.