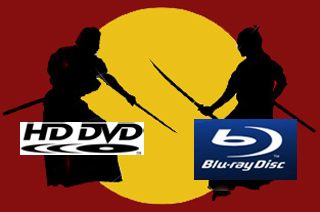 The ongoing format war between Blu-ray and HD DVD is now heading into a new phase: one in which consumers are eagerly awaiting a winner to emerge. But, Sony has a lot to gain now that Blockbuster, a movie rental chain has opted to roll out an expanded Blu-ray disc inventory for rental to 1700 Blockbuster stores by mid-July. The company already rents out HD DVDs through its online rental service.

According to Matthew Smith, SVP Merchandising for Blockbuster, “We intend to meet the demands of our customers and based on the trends we are seeing, we are expanding our Blu-ray inventory to make sure our stores reflect the right level of products.”

When Blu-ray and HD DVD formats were just introduced in 2006, Blockbuster began offering HD formats on all movie titles. Then, in November 2006, the company started stocking select titles in both HD DVD and Blu-ray formats. And, when Blu-ray rentals significantly outpaced HD DVD rentals at Blockbuster, the company decided to expand the number of stores offering Sony’s Blu-ray format.

Now with Blockbuster’s decision to expand in July, the 1700 stores will stock over 170 Blu-ray titles and will continue to update the inventory as and when movies are released.

It certainly looks like people prefer Blu-ray titles. If you look at the trend of the format war, you will notice that the HD DVD format appeared to be an initial winner due to its higher-quality titles and lower prices. But, then Sony’s PS3 came along and shattered all hopes for the HD DVD format, with its addition of the Blu-ray capability for the PS3 console.

In a move to make a comeback, Toshiba reduced the price of its HD DVD player. Sony and Panasonic then introduced cheaper Blu-ray players with Sony’s BDP-S300 topping the list at just $499.

Trying to capitalize on the ongoing format war, Samsung introduced its BD-UP5000 Duo Player with HD DVD and Blu-ray support. LG also tried to do the same with its Super Multi Blue player.

As of now, the winner in the format war has yet to be seen clearly. Both formats are trying to gain a one-up position. Once again, we’ll have to wait and watch. But, Blockbuster.com’s move to stock up on its Blu-ray titles can surely be seen as a boost for Sony.