TechShout
Home Hardware Drobo: The Storage Robot that keeps an eye on your HDDs unveiled... 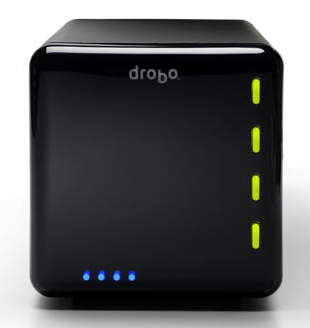 Data Robotics has come out with a hard drive enclosure called Drobo, which has been promoted as the “world’s first storage robot”. Drobo has the unusual ability to automatically detect and format up to four 3.5-inch SARA drives of any capacity! No wonder, the company has been calling it a robot.

With a name like Drobo, you really cannot expect this one to scare little kids or get your slippers to you! Instead, this little bot guards your hard drives by automatically sensing when things go a bit haywire with one of your hard disk drives.

So, if there happens to be any data corruption, Drobo will spring into action and repair whatever has gone wrong. More importantly, it handles a number of maintenance tasks automatically such as creating redundancy, and sensing and repairing data corruption.

When the Drobo is attached to a Mac or a PC via USB 2.0, the computer sees the Drobo as a unified drive. It also features colored LED lights that indicate the status of each bay. For instance, yellow indicates low space, while a flashing red indicates failure.

It is compatible with Windows and Mac PCs. You can get yourself an empty unloaded Drobo enclosure for $699.