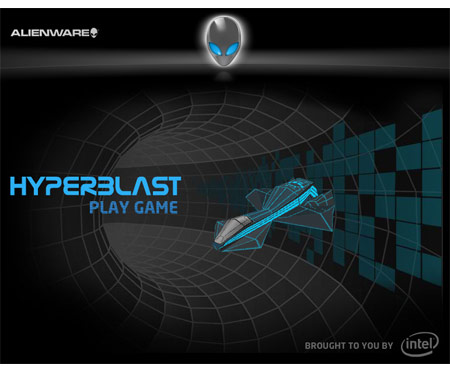 Industry giants Alienware and Intel have got-together to release “Hyperblast,” which is touted to be a scintillating, sci-fi themed web game.

In the Hyperblast title, players can go ahead and race and blast their way through a virtual, 3D space track to win prizes.

The game features three different futuristic tracks on which players must race against tough AI drones. The player can deliberately evade enemy drones for an optimum lap time or use one of the numerous power-ups available to eliminate the opposition for bonus points.

Further on, the progressive tracks become even more challenging but luckily the player has the choice to upgrade with Intel multi-core technology to become more powerful and destructive and increase his scores thereby.

What’s more, you don’t do all this for nothing! There will be a weekly draw for exclusive Hyperblast t-shirts, and players who complete the final track will also be eligible to enter the grand prize draw to win a fully loaded Alienware Area-51 m9750 extreme gaming notebook with Intel Core 2 Duo processor worth £2000. Now that surely seems to be like the icing on the cake!