TechShout
Home Hardware 5 And 6 GHz Processors to Debut in 2007? 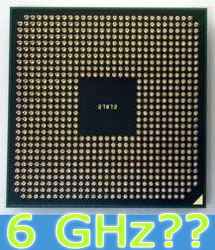 Well if you thought that your new 3.6 GHz processor was the latest state-of-the-art machine, think again. Come February 2007, all the major chip-manufacturing firms will be displaying their new 5 and 6 GHz processors. The 2007 International Solid State Circuits Conference in San Francisco, which will begin from February 11, will see many new high performance chips.

IBM will be displaying its Power6 processor that will touch 5 GHz mark. Sony and Toshiba will go a step further by showcasing chips that will reach 6 GHz. However, Intel, which is the leader in chip making, will come out with a relatively slower 4 GHz chip. But Intel and AMD have focused more on the multiple processing cores on each slice of silicon wherein they have increased the multitasking capacity of their new chips.

Intel representative Erica Fields says, “It was designed as a research tool to test interconnect strategies for many-core processors. Research goals for the project included testing new chip design methods and investigating how to move terabytes of data rapidly between cores on-chip and between the cores and memory.”

Sun Microsystems will join the battle by giving out details on its Niagara 2 processor, which has an eight-core design that can run 64 simultaneous sequences of instructions, called threads. This next-gen chip measures 342 square millimeters and has 500 million transistors. IBM’s Power6 will have 700 million transistors and measure 341 square millimeters while Intel’s next-gen chip will be able to do 1.28 trillion calculations per second. Amazingly, chip is just 275 square millimeters in size. We should not forget that Sony PS3’s Cell chip was co-developed by IBM, Sony, and Toshiba. Power6 could be called the next step after The Cell.

The next year promises to be the year of “next-gen chips” just the way 2006 was the year of the “next-gen consoles”. But the interesting thing is that, the chip-manufacturing firms should release these high performance chips for sale and not just use them to flaunt their technological might and sell the 2 and 3 GHz chips.